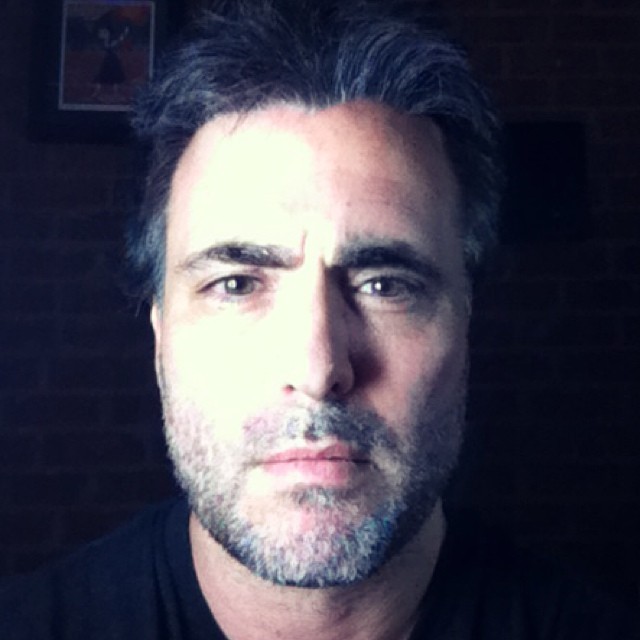 A wonderful article from Dan Panosian’s Facebook wall yesterday Friday January 13 on the various essential aspects of inking. He’s a master of the art form and, as a contributor since the Inkwell Awards launched in 2008, has even graciously designed our Inkwell Awards logo!  We print the article here with Dan’s permission. Bob

There’s been a lot of discussion about inking lately among professionals. The vast majority of my early career was spent inking. Lots of inking. Inking, for those that aren’t familiar with the term is the black line work aspect of the art before it’s colored. Sometimes Inkers are called Tracers. It makes sense, in many cases the pencils they’re inking are so finished looking that they may not really require inking. But in some cases, an Inker is adding finesse to the drawing. Fixing little mistakes or adding texture. The role of the Inker varies from project to project. And like all professions, some are better at it than others. But there are some fundamentals that are essential to comic book inking.

Inking and line art drawing is basically using lines and in some cases, tones, to replicate Light and Shadow for 2D purposes. Understanding that alone is the perhaps the most important aspect of both drawing and especially inking. Using lines to visually inform the viewer of how light is affecting an object. Or, how it isn’t – in the case of shadows. Simple, right? You would be surprised how often that sort of thinking is abandoned, particularly in the comic book art-form. Even with professionals.
At times, artists forget that very important concept for the sake of artistic expression and call it Style. Style is key in the art world. It separates one talent from another. A well crafted style of drawing or inking becomes, in a sense, much like a signature. It’s what separates us and makes our artistic expression unique. It’s why you like one artist and not another. A style either appeals to you or it doesn’t. Regardless of whether or not a style appeals to you – it’s key that the style adheres to the same rules of nature and what we relate to everyday when we open our eyes. The Principles of Light and Shadow.

So a style can be fancy or it can be bare. It can flourish and it can even occasionally break rules. But unless, you’ve first mastered drawing, like say – Picasso, breaking the rules for the sake of style is a big mistake. It’s not “telling the story” with ink. Drawings are the tools of visual storytellers. If your drawings convey your story – you’re a successful storyteller no matter what the style. But if your style interferes with the story flow- you’re failing. An illustrator can be extremely detailed or extremely bare-bones in their approach but the objective should always be story. That goes for inking as well. If the inking is off, that can affect the reader’s attention. Their eyes try to correct or make sense of what they’re seeing. That is a determent to story and unless it’s intentional -should be avoided.

To demonstrate the most simple and most powerful aspects of inking I’ve used this beautiful Winnie the Pooh coloring book illustration as an example. Years ago, Dick Giordano gave me the most important inking advice of my career. He said to always imagine a light bulb at some point/place in the drawing. If the light shines from the top of the page that means every object with a top and bottom line [ like a cylinder ] is affected. The top line is light and naturally the bottom line is heavier. Suddenly, the object [ cylinder ] has the illusion of real solidity and weight. If both lines are the same line weight, it’s harder to demonstrate weight. It’s a simple concept.
Of course there are examples of single line weight illustration. But if an inker is employing varying line weights and the Principle of Light and Shadow is messed with – things can be confusing. It won’t make as much visual sense. If an inker just likes using a bouncing line weight because it looks pretty – it will lack sophistication. Comic books and sophistication? It’s possible!
So in the example below – note that even the tops and bottoms of feathers employ the same well executed line weights. But let’s remember it’s for a coloring book. There’s nothing wrong with that. But for a comic book, that sort of flourish misinforms the viewer. Style overrides substance. Style is important but it should never distract from story.

Another quick note. Many inkers freeze up on faces. Suddenly they pay more attention and forget that the bottom of a nose has weight – not quite as much as a chin – but it extends outward and creates a shadow. And thus- a heavier line is required to properly illustrate that. The same with the eyebrows. They extend over the the eyes. Our eye lashes have a natural “black” line to them. So the top of the eye should be pronounced. It will make the eyes pop more. Just like they do on our faces in real life. Hair has shadows too. It clumps, it waves. The top of the hair should be light and the bottom should be heavier – just like other objects.
For that matter, notice the trim lines on the “egg” or whatever that object is that the owl is carrying. Some lines are simply there to illustrate a change in color. Similar to the lines encircling Owl’s eyes. They don’t have weight. The should simply denote a change in color – not depth.
Anyway, stuff to think about. 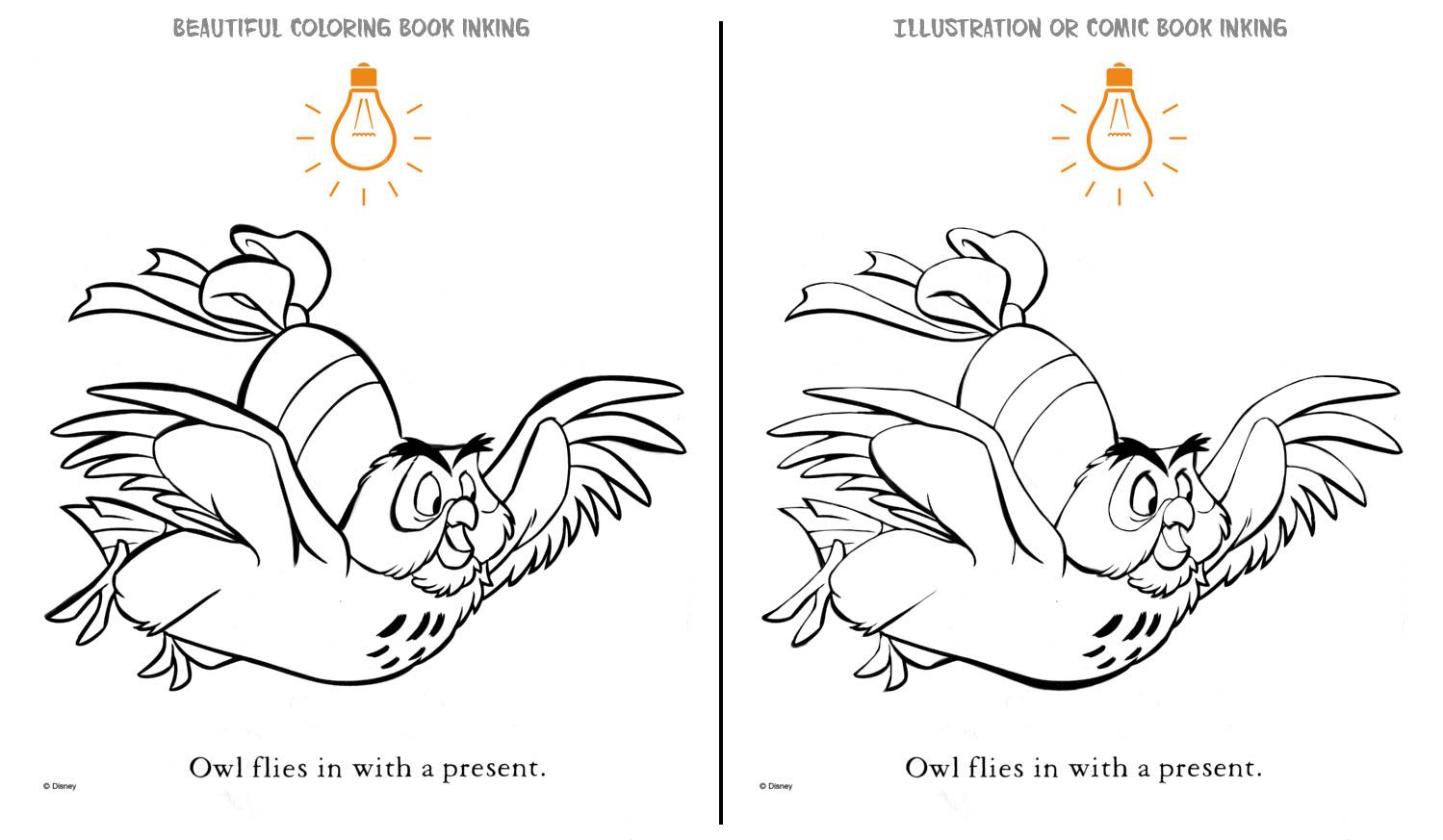 Upon accepting the position of Inkwell ambassador as reported last month Rich Buckler graciously offered the non-profit organization to share this new, fascinating material on his thoughts on the art form of inking and his career experiences with it. Rich is an accomplished teacher on sequential art storytelling and master of many of the necessary skills involved in comic book production including INKING.  He has had several comic How-To books published in ’80s-’90s on these crafts. Most comic book art is a collaboration of a pencil artist and an ink artist. Two artists who produce, in separate stages, the finished art that (after being lettered and colored) goes to the printer. So really, every printed page has actually been drawn twice.

Most comics fans do not have a good understanding of that creative process and what that involves. Misunderstanding what an inker does can can cause all sorts of distorted ideas. Comic book pencillers have all sorts of ideas about inking. Some think inkers are only tracers (which is not accurate) or, at best they are a necessary evil (which is very inaccurate). Sometimes the inker gets too much credit for the look of the final art–sometimes, not enough.

I see the penciller/inker collaboration as a team effort. Inkers are artists. And every team effort of pencillers and inkers on a comic book is almost always a compromise.

There are no “super inkers” who make every penciller look great no matter whose art they ink (I wish there were!). That is just a gross exaggeration. Some combinations do work better than others. Generally inkers do a judicious amount of embellishing and make “improvements”–but not all of them do this. And nobody is perfect.
So let’s take a look at what inkers do.

The inker is responsible for the final look of the art–to make it as sharp and attractive for reproduction as possible. In that sense, they do correct things as they work. For example, a stray line, a missed detail, or some appropriate added black areas here and there–things like that. Pencillers who ink their own work do this too.

Nobody even attempts to duplicate exactly all of the subtleties and nuances of the pencil work. That is not only not desirable, it is practically impossible. What the inker is expected to do is faithfully render the drawings effectively in ink. He/she is expected to know good draftsmanship but not expected to redraw what has already been drawn.

Which is not to say that that doesn’t involve drawing; of course it does! So, ideally, every professional inker should have a good grasp of the basics of drawing. Why is that essential? When the inker comes on board everything has already been drawn, right?

Well, consider this: A good professional inker will never merely trace pencil lines with a pen and brush. That’s not inking; it’s just tracing. Trust me, that approach is amateurish and only produces mediocre results. A really substandard inker (one who is not competent or whose drawing skills are not up to professional standards, that is) may get work, but not for long–and certainly not on a regular basis! Okay, in the comics a few bad inking jobs may happen. (And it’s a wonder that there are not more!) But that almost never occurs on a top book. And I don’t know of a single instance where a totally inept artist was ever afforded the opportunity to make a career out of it.

END_OF_DOCUMENT_TOKEN_TO_BE_REPLACED

Phyllis Novin here. A quick word of thanks to Bob for letting me shamelessly plug my inking class at MoCCA NYC on his nifty website.

This is a hands-on inking course designed for those new to comic book inking as well as for those who want to expand their basic inking skills.  While primarily brush-orientated, you will also be working with crow quill pens and other tools both rational and irrational.  You will not only learn inking techniques but get an understanding of the basic framework behind inking.  You will know what you need to do on a page and why.