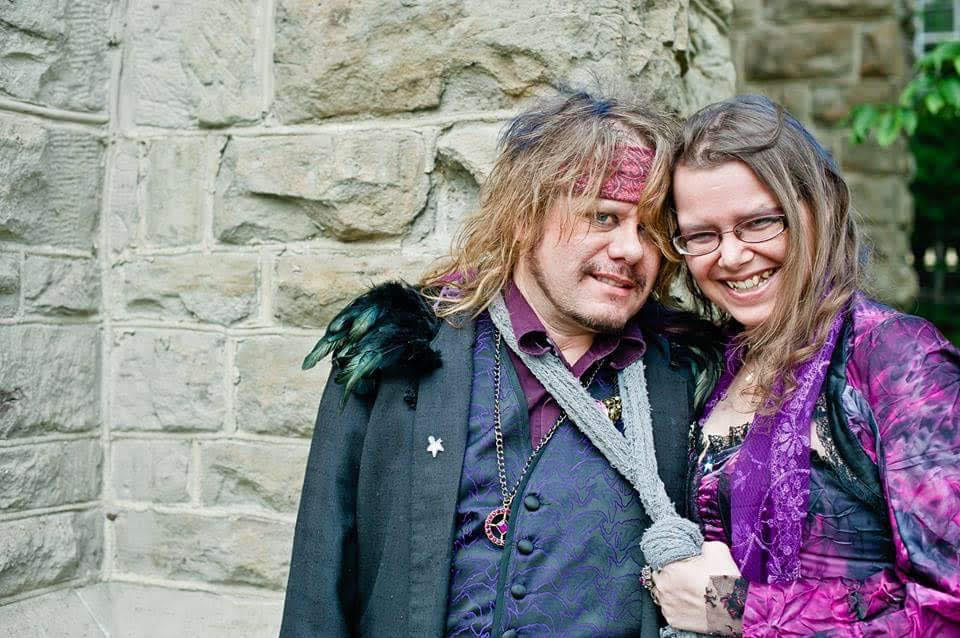 WHAT THE HECK IS A “SASRA” AND WHO WAS STACEY ARAGON?

Since 2018, the Inkwell Awards has awarded the Stacey Aragon Special Recognition Award, or SASRA, to one or more deserving professionals. Formerly known as the Special Recognition Award or SRA (begun in 2015), the honor was renamed after one of the Inkwells’ beloved contributors and committee members who passed away from cancer at the too-young age of 39 in 2017. Her love of comics, the artists and her fellow fans made Stacey a force of nature that saw her through the worst of times while bringing out the best in everyone who knew her.

Requirements for the award are listed after the following statements.

“After joining us in 2009, Stacey served as a contributor for social networking and fundraising until 2011 when she was promoted to the core committee, the first woman added to our roster. She only served there less than a year because her cancer and treatments became more serious and she had to move cross-country for viable healthcare. Yet she remained a senior contributor from November of 2013 until she passed, even sharing an auction notice on Facebook for us 10 days before the end. She handled several duties over that time like updating our site’s Inker Resources section and database; fundraising; and coordinating our Nomination Committee and a volunteer network.

“One of the projects she was excited to create was a multi-tier membership system so that we could collect annual dues with an incentive system. That was not to be. She would wrap up her final days sharing all of our announcements and even attending some conventions in her area with her husband Dave because it got her away from all the angst of reality and she was able to use it as therapy, even collecting donations from artists to ship to us.

“She so enjoyed helping and giving to others that it made her feel better. This, her husband, and her connection to loved ones via the internet were her lifelines and what I believe kept her fighting for as long as she did. She would often say that the Inkwells were her family. She was as close to family as anyone in my organization at the time. As her availability lessened I never removed her from our team credits and in her last couple of years I listed as her position on our brochures, website and books as ‘heart & soul.’ That’s where she touched me and so many who knew her. I dedicated the 2017 HeroesCon live awards ceremony to her and gave a brief tribute to honor her. I owed her at least that much for her gifts and making my non-profit better than it was when she joined it. Rest in peace and thank you, Stacey.”

“Four years ago, as she was lying in bed looking up at the lightning, rain and the thunder through the bedroom window, through hazy eyes, and fighting the effects of the morphine, she listened to me read her Thor comics, her absolute favorite. She loved it when I read comics to her. I would take on different voices for each of the characters and make the crazy sound effects. Maybe she was imagining that Thor was coming to take her hand to walk the Rainbow Bridge into Asgard.

“Stacey Aragon LOVED comic books. All kinds. So do I, so finding a woman like her was an amazing journey because it would double our amount of books to read. Her favorites were Thor, Teen Titans, Elfquest, Amethyst, Green Lantern, Teenage Mutant Ninja Turtles, Shade The Changing Man, tons of independent books, and everything by Sergio Aragonés, who she so luckily got to meet a year before she passed. She was so excited meeting him and laughed and laughed at the stories he would tell. Just watching her “fangirl” over him was enough to make me smile the rest of my life.

“Stacey volunteered for tons of comic-book related groups. She worked as a Host, Reviewer, Social Media and Networking Contributor and Fundraiser, with industry faves Dave Simons, Ernie Chan, Bob Almond, and so many more. [She contributed to] The Facebook Comic Con, Velica Comics in The U.K., The Flint Zombie Walk, many comic conventions and podcasts, and she immersed herself into The Inkwell Awards and just anywhere she could find a way to help others become part of the comic-book world.” 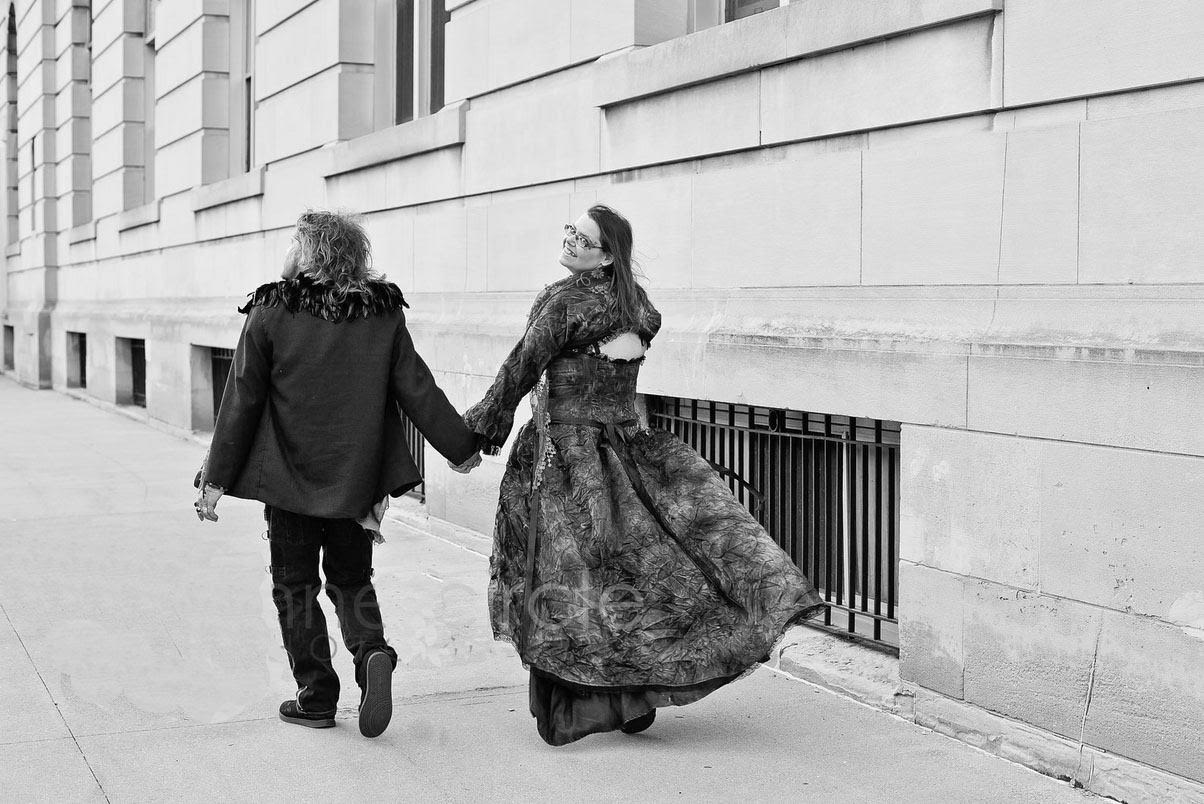 THE STACEY ARAGON SPECIAL RECOGNITION AWARD (SASRA) is a limited, annual lifetime achievement award for an inking career of outstanding accomplishment in American comic books of generally 25 years or more, but a posthumous artist can be eligible, having passed on before reaching the minimal career time. It is a separate recognition from the Joe Sinnott Hall Of Fame Award, more for those who may not have the same level of public fame but are no less deserving of recognition.

The SASRA is for artists who may or may not be or have been “headliners” or showered with awards but nonetheless had a notable impact on the field, an impressive/prodigious output, and/or the overall respect/admiration of their peers and/or fans. Specifically, names that fit one or more of the following:

2015: Bernie Wrightson (Wrightson would posthumously win the Sinnott Hall of Fame in 2020, the first to achieve both of the Inkwell’s lifetime achievement recognition)

2017: Violet Barclay, Allen Milgrom (The award for Violet Barclay was accepted posthumously by Allen Bellman. At the time of the awards, the Inkwell Awards was unable to find any of her heirs or family.)

2018: Russ Heath (Heath would pass away almost immediately after receiving the trophy, as would Bellman in 2020)

2020: Norman Lee, Sal Buscema, Allen Bellman (Lee was the first recipient to have less than 25 years in before he passed away. Buscema would be the first living artist to receive both lifetime achievement awards and do so consecutively.)

2022: Gene Day, George Perez, John Severin, Dave Stevens (Perez would pass away 4 months after being recognized, John Severin and his 2019-awarded sister Marie would be the first family members awarded) 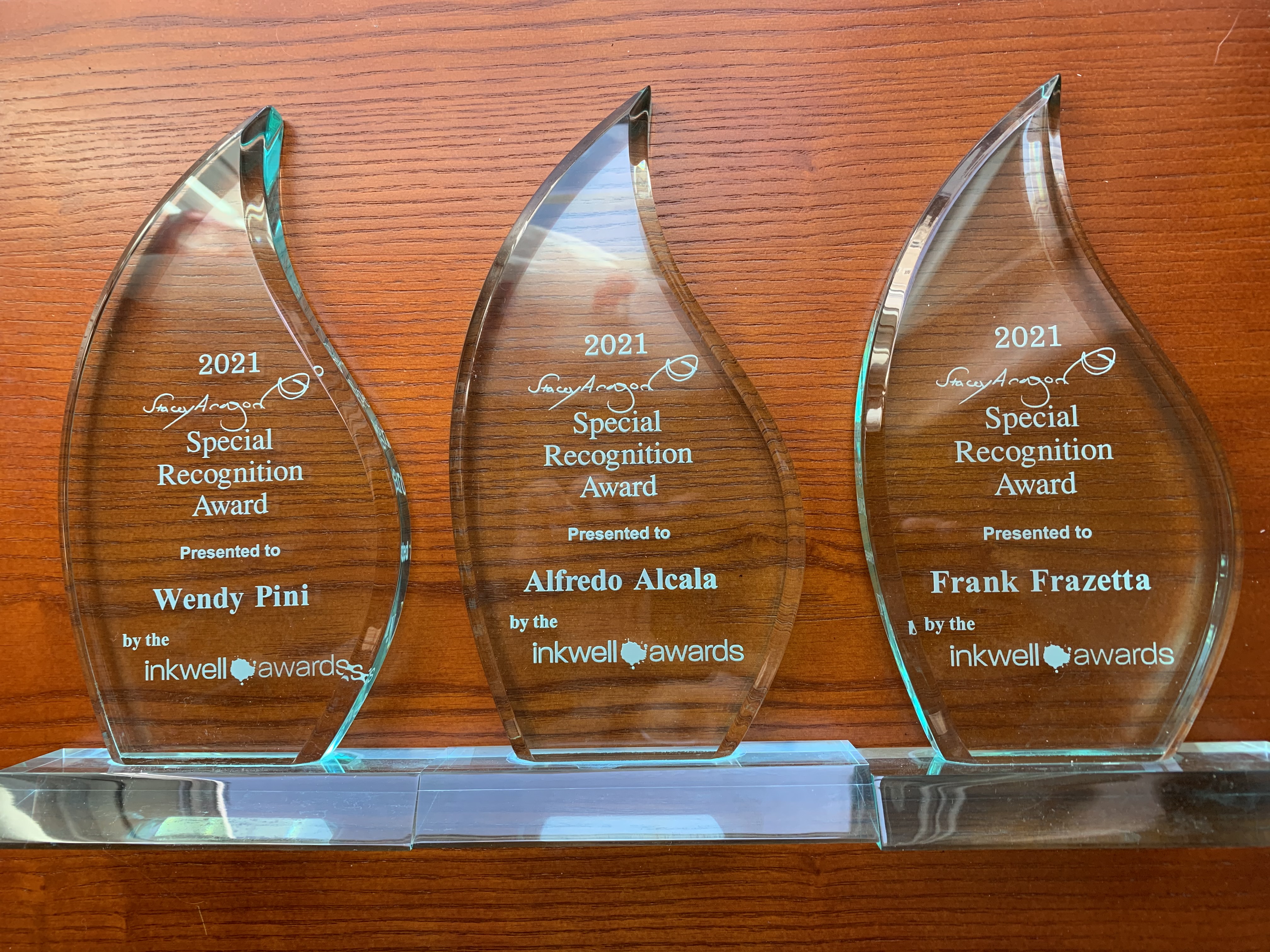 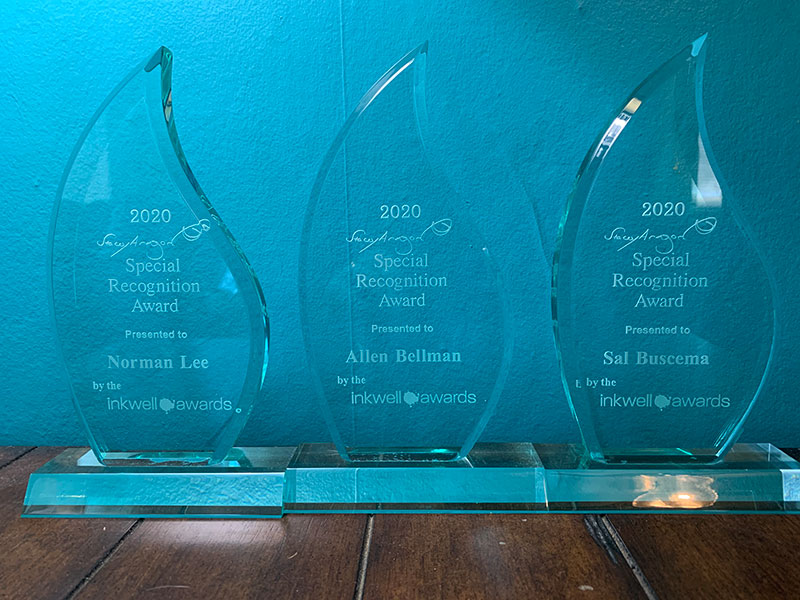 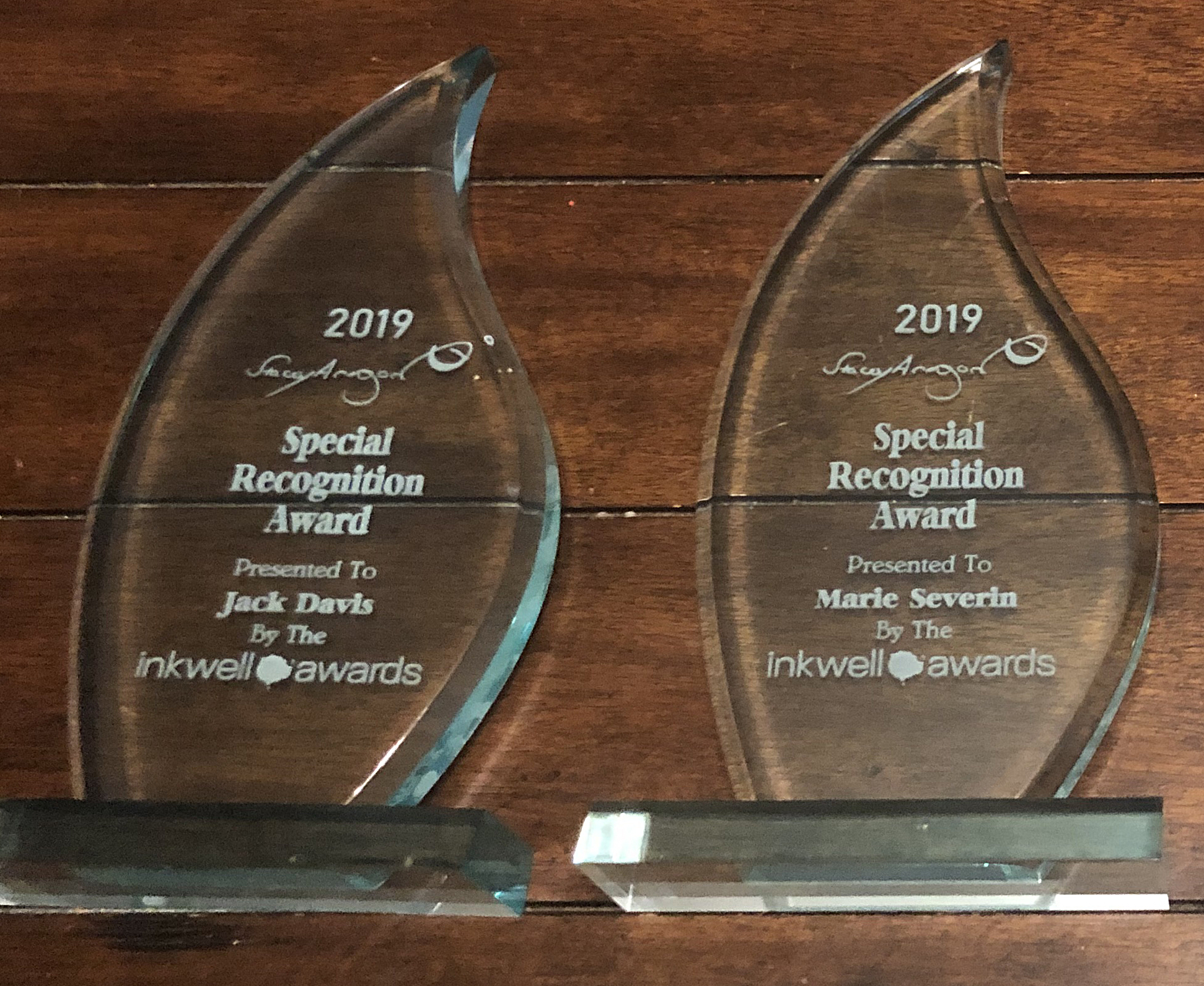 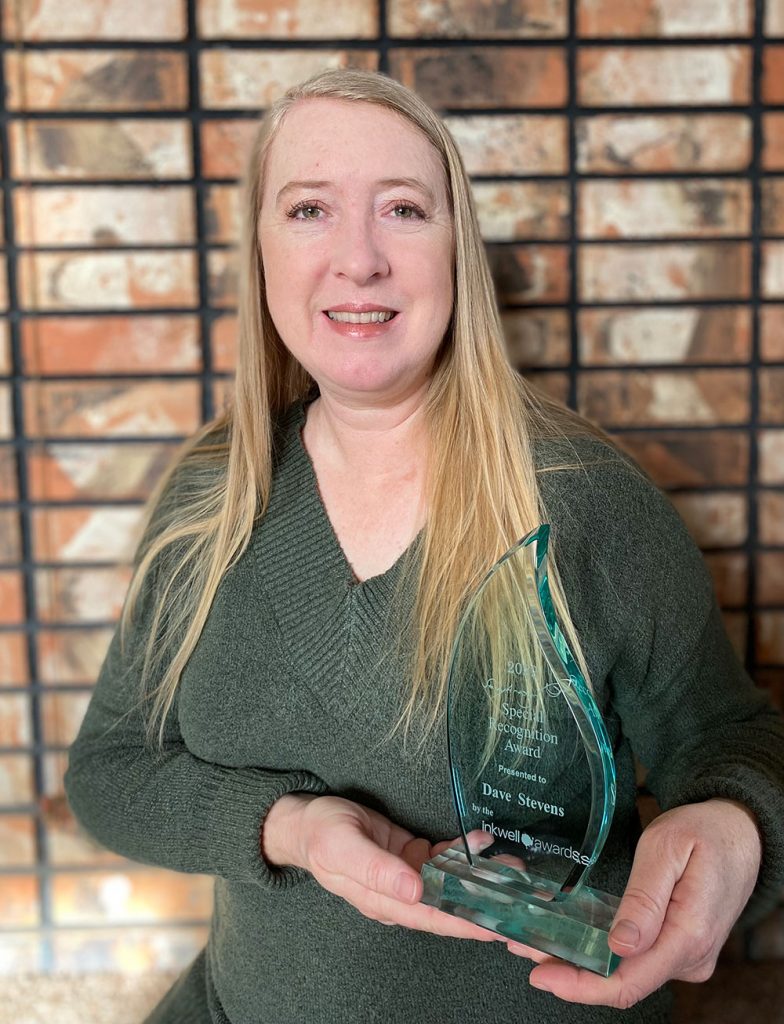 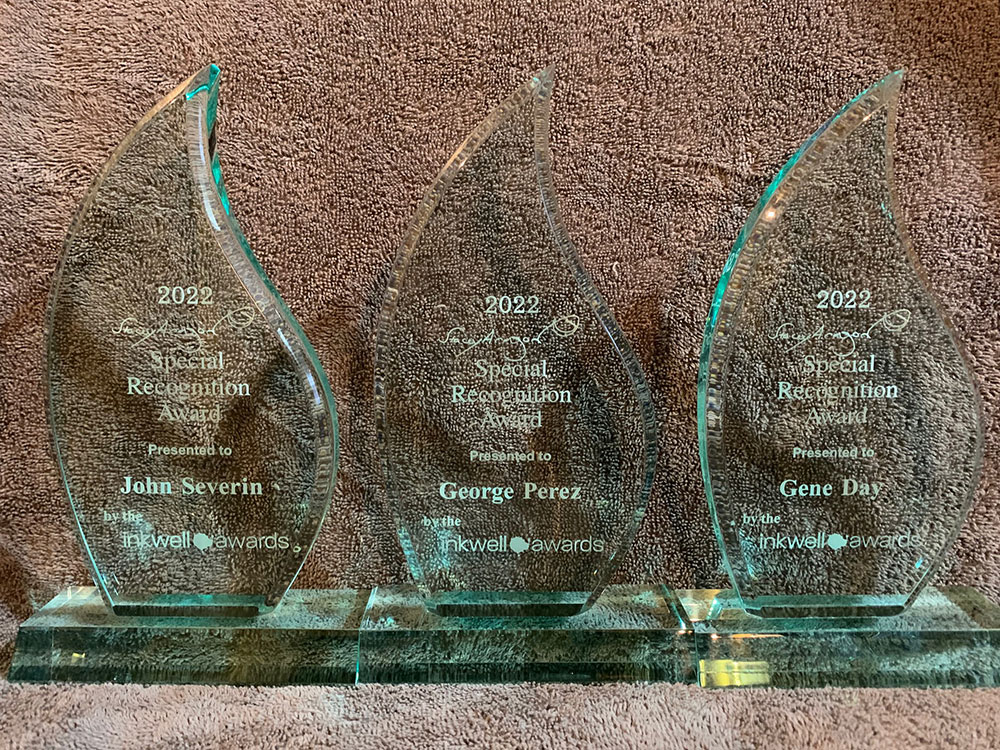