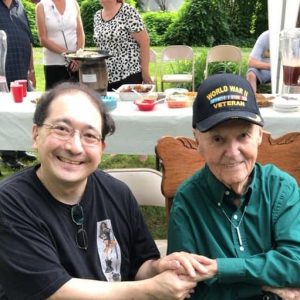 Bob Almond: “The last time I was with Joe August 29, 2019 in his hometown of Saugerties, NY to celebrate Joe Sinnott Day (officially August 31) and his commemorative exhibit gallery showcasing his life and 69 year career.”

On June 25 at 10:50am, grandson and author Dorian Jack Sinnott posted the following statement at the Facebook Joe Sinnott Art Page that he admins:

“It with great sorrow that we must announce the passing of Joltin’ Joe Sinnott on June 25th at 8:40am at the age of 93. He went peacefully with the knowledge that his family, friends, and fans adored him. He enjoyed life and was drawing up until the end. He always loved hearing from all of you and having your comments read to him. Each and every one of you were special to him.
The Sinnott family requests their privacy and understanding during this difficult time. Please send condolences to:
The Sinnott Family
27 Spaulding Lane
Saugerties, NY 12477
Thank you again for being such loyal and dedicated fans and friends to Joe. He considered all fans friends, and seeing you at cons and reading your messages was what kept him young at heart.
RIP Joe Sinnott
October 16th, 1926 – June 25th, 2020″

It’s true. Many of you may have already read about it. We at the Inkwell Awards lost the heart and soul of the Inkwell Awards family. I was informed by the family that Joe was in hospice Wednesday. I knew this devastating news was coming but I am still not ready for it. I’m trying to get my thoughts together but I’m overwhelmed by it all. For that please forgive me. I also have a computer issue atm and can’t retrieve a photo to accompany this post. (Update: pal Mike White sent me this pic from the 2018 Terrific since I don’t have access to my other photos atm. Thanks, Mike!) 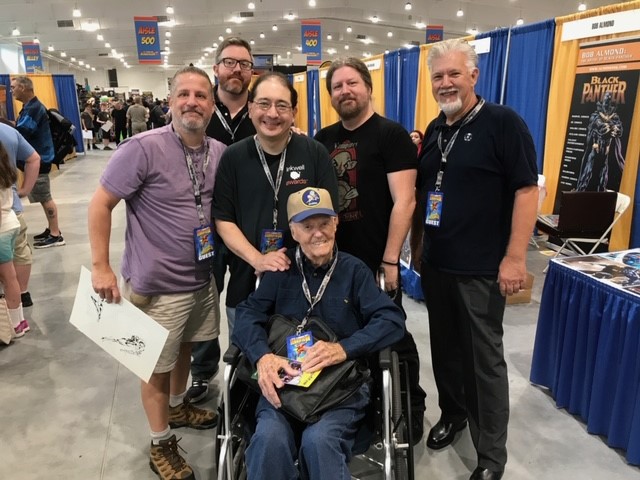 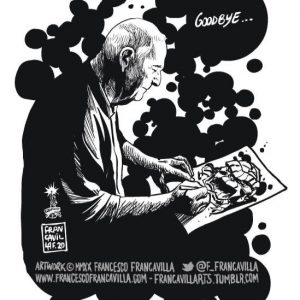 I am privileged that Joe was my friend. I believe the last time I spent with Joe was last year’s gallery of his life and career in Saugerties, NY. There was a tentative plan to visit him after the holidays but plans changed. I had been making calls to Joe monthly and as the pandemic hit us it tragically meant a quarantine for Joe from the outside world.  I tried calling him weekly. We last spoke in mid-May and it was possibly the longest call we’d ever had together. He told me he was looking forward to my next call and I know the isolation was rough on him. I tried calling two more times but I couldn’t seem to connect with him. Mark Sinnott told me he was also having a hard time reaching him. I was soon informed that Joe was transferred to the hospital because he was weak and had lost a lot of weight. Anyone who knew Joe knows he was relatively thin so that info seriously concerned me. Calls were not possible and it was hoped that he’d be stronger and bounce back after a month’s stay. But he declined further and this week I was informed he was in hospice. And now he’s gone. I wish I’d had another visit or another call with him. Wish I’d made more time to try to catch him on the phone.

When the Inkwell Awards were formed over 12 years ago there was little to no hesitation that Joe would be our Hall of Game Award namesake. His reputation was sterling, his body of work legendary, his talent universally recognized. And he was a fine gentleman of a human being. Joe was ecstatic when we asked for his approval in 2008 and when he was announced as our first special ambassador. Joe gave our fledgling non-profit the credibility and respect that we needed in order to survive long term and he was thrilled when we attended shows together and got to meet the team volunteers and spokesmodels. It amazed me that the quality of his ink lines and drawing prowess at his age were still unmistakable and flawless as anything he’d done over the decades. He only began to slow down a year or so ago, reducing workload and public appearances. He cherished meeting his peers, friends and fans at every location. But the travel, the sketching, even signing items became too draining for him. Mark was staunch and resolute about looking after his dad and thank God for that. It was comforting to know Mark would always be his top advocate, deciding on what was best for his health. In the past couple of years I began hugging him more when we got together. I’m not sure how a Navy Seabee who had stormed Okinawa in WWII felt about that but he never showed disapproval. Everyone loved Joe and he always reciprocated, the nicest guy and most sincere man around anywhere. Even with his relatively small stature he was a giant among artists, setting the bar high and showing others how it was done. He inspired everyone and I was always fond of him and truly honored to be his friend. I loved this exceptional man. And I will always miss him.

A world without Joltin’ Joe is a sad, poorer place. But his art career achievements, his work, his humanity, his legacy will always bring love and joy to the world.

Sincere condolences on behalf of the Inkwell Awards to his beloved family and loved ones for their incredible loss.”

On June 30 Dorian posted this update:

“Joe was buried today privately with military honors and a beautiful Catholic mass at St. Joseph’s Church. He was surrounded by his family. Thank you to Father Chris and Deacon Smith for the beautiful service. Joe would have been honored.
A celebration of life for Joe will be held at a future date. Thank you for all your thoughts and prayers ?”

July 2- Bob Almond: “I am sorry to have taken so long to post this at the Inkwell website. It has been a devastating, somber week of mourning.  I am heart-broken. Joe was a fundamental, crucial part of our organization FROM DAY ONE soon after we formed in January 2008. He was 81 then. Twelve and a half years he served. If our late, beloved Stacey Aragon was our heart, then Joe was our soul, and he always will be. Picking Joe for his role as special ambassador and Hall of Fame namesake was a no-brainer. He is debatably the best damn ink artist ever in the industry of comic book sequential art. And his reputation as a gentleman and kindhearted and altruistic person trumped even the artistic achievements. Just having his name associated with us gave us credibility and respect. I thank my lucky stars that when Jim Tournas and I first approached him and his son Mark at the 2008 NY Comic Con that they accepted. Mark was Joe’s handler & protector. He was the essential liaison between his dad and us and if it wasn’t for him the many accomplishments we made would never have happened, thousands of fundraising dollars would not have been raised. He was/is under-appreciated and awarding him an Above & Beyond Award hopefully showed him how important he truly was to us. I attended numerous shows beside Mark & Joe, had dinners with them, my senior spokesmodel Hailey and other close friends of the Sinnotts, and I had the joy of visiting the family at their home and Joe at his apartment. I became part of their family and Joe became my cherished friend. I didn’t see that coming in a million years. (And it’s so ironic that between the mid-1980 to early 1990 Wrightson Halloween parties in Woodstock and the Ramapo High School Cons that followed, both in the upper state New York region that I would not run into Joe in his Saugerties backyard for years. I guess I’ll always be tied to that community of fine folks and legendary artists.)

It’ll be hard going forward without his good-spirited laughter and smile. He is loved. He is missed. He left this world a much better place and we tragically shall never see his like again. But I count my lucky stars for every moment and conversation I ever had with him as it enriched my life. Forward and upward the Inkwell Family soars into the next decade as a successful advocacy organization. Thank you, Joe!” 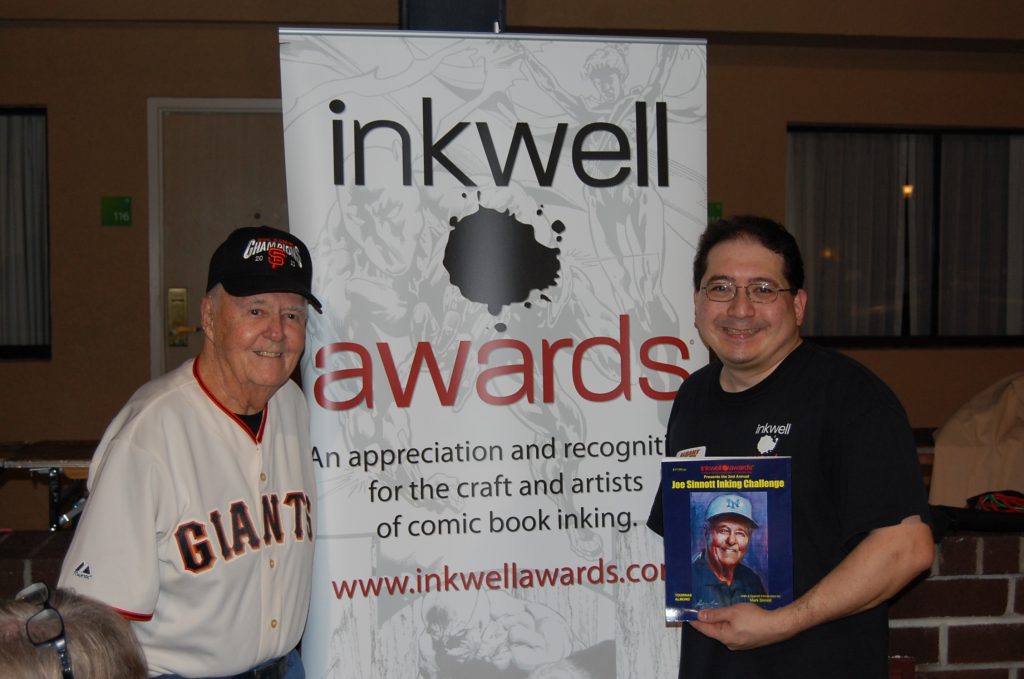