SAL BUSCEMA: AN INKER FOR ALL SEASONS 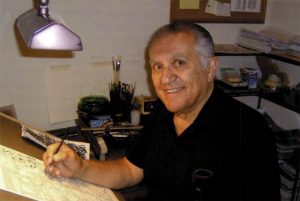 Sal Buscema was born in Brooklyn, New York on January 26, 1936. He was the youngest child of John & Sadie Buscema, preceded by siblings Al, John, and Carol.

Sal’s brother John, born on December 11, 1927, was nine years older. Growing up, Sal would see John drawing at the family dining room table, and this would inspire him. John would critique Sal’s work, offering his brother both advice and encouragement.

Sal attended the Fiorello H. LaGuardia High School of Music & Art in Manhattan. He would often visit the nearby Metropolitan Museum of Art where he would spend hours sketching the sculptures in the museum’s collections. 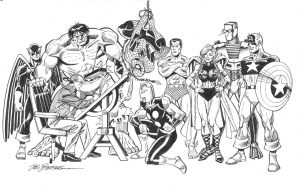 John got his start as a professional artist at Timely/Marvel Comics in 1947 when he was 19 years old. Sal idolized his brother, and John’s early comic book work served to further inspire Sal’s own artistic aspirations. Sal would do some uncredited backgrounds for John’s work at Dell Publications in the early 1950s.

Although Sal would become well-known and highly regarded for his work as a penciller, his initial intention was to focus on inking. He got his first taste of it by inking some of John’s pencils. John’s subsequent approval of Sal’s work served as a huge motivator for the younger artist.

Speaking with comic-book historian Jim Amash, Sal explained that he always felt comfortable using a brush, and that inking just seemed to come naturally to him. 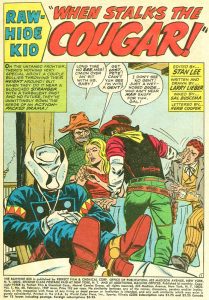 Prior to entering the comic-book field, Sal worked in advertising. Once he got his foot in the door at Marvel Comics, he decided to make comics his career, as this would enable him to work from home, thereby avoiding the long commute he had at the time. Sal regarded himself as a disciplined individual, and he knew he would be able to set his own work schedule in his home studio.

Sal entered comic books in 1968. His first published credited work was inking Larry Lieber’s pencils on the story “When Stalks the Cougar” in Marvel’s Rawhide Kid #68, cover-dated February, 1969. Sal recalls that the first job he actually worked on was a Gunhawk story, where he inked Werner Roth’s pencils, although that story did not see print until a year-and-a-half later in Western Gunfighters #1 (August, 1970). 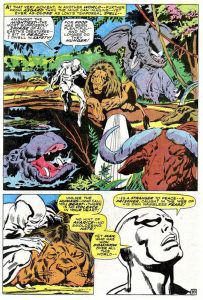 By the late ’60s, brother John had already established himself as one of the top artists at Marvel. John was famously critical of the work of other inkers over his pencils. He was unhappy with the inking Joe Sinnott was doing over his pencils on the Silver Surfer series, as he felt Sinnott changed the work too much. John requested that Sal be allowed to take over the inking, as he knew his brother was very familiar with his style.

Sal would ink Silver Surfer issues #4-7 (February to August, 1969). John was apparently satisfied with his brother’s inking, although many years later Sal would recall to Jim Amash with amusement that John did memorably state “I thought the feathering was sloppy.” 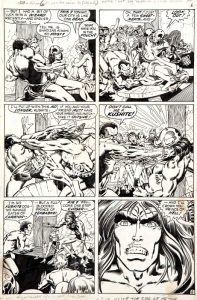 Other pencillers Sal inked in the early 1970s were Barry Windsor-Smith on Conan the Barbarian, Herb Trimpe on The Incredible Hulk and Gene Colan on Our Love Story.

Due to both his strength as a storyteller and his speed, as the ’70s progressed, Sal found himself more and more in demand as a penciller or a layout artist. While this did result in Sal receiving a great deal of work from Marvel, he began to be dissatisfied with having to rush to meet deadlines, and with the finishes some artists were doing over his pencil breakdowns. 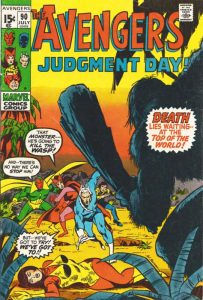 By the end of the decade Sal decided to once again focus on doing full artwork, which enabled him to ink his own pencils. This resulted in some very impressive work on The Incredible Hulk and Rom Spaceknight in the early 1980s and Thor in the mid ’80s. 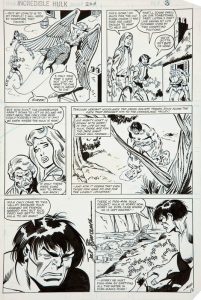 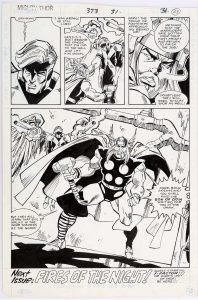 In turn, this led to some truly exemplary, atmospheric artwork on Spectacular Spider-Man. Sal’s stunning run on that series lasted from 1988 to 1994. Sal later recounted how his inking during this time period was influenced by the work of Bill Sienkiewicz. 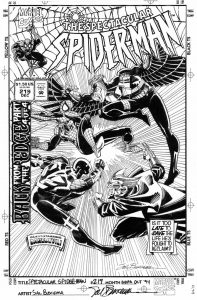 In the mid 1990s the comic book industry suffered a severe implosion. Marvel Comics was among the many publishers hit hard, resulting in numerous layoffs and cancellations, culminating in the company filing for bankruptcy in December, 1996. Sal had spent more than a quarter of a century working at Marvel, but out of necessity he went over to their main competitor, DC Comics, in search of work.

Sal worked for DC from 1997 to 1999. Although he did do some pencilling and some full artwork, the majority of his assignments for DC were as an inker. Sal inked a diverse selection of pencillers, among them Klaus Janson (Batman), Shawn Martinbrough (The Creeper), Denis Cowan (Steel), Cully Hamner (Robin), Dick Giordano (Wonder Woman), Jim Aparo (Batman) and Will Rosado (Green Arrow). 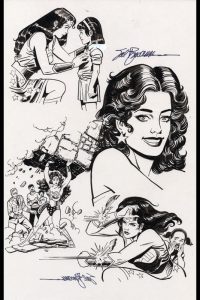 Sal had previously inked Ron Frenz’s pencils on the first issue of Kickers, Inc for Marvel in 1986, and the two were reunited at DC in 1999 when Sal inked Ron’s pencils for Superman #149. This was the beginning of a long, fruitful collaboration between the two artists, with Sal becoming Ron’s regular inker. 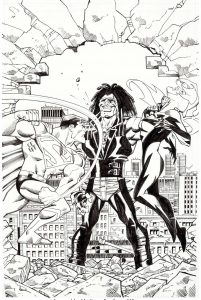 Ron and Sal returned to Marvel in 2000, and three years later became the regular art team on Spider-Girl. Other titles they have collaborated on in the past two decades are Thunderstrike for Marvel, Superman Beyond for DC, and G.I. Joe for IDW. Most recently they have been working on The Blue Baron and The Heroes Union from Sitcomics/Binge Books. 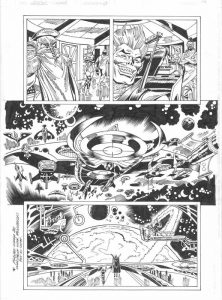 After his return to Marvel, Sal also notably inked Erik Larsen on The Defenders and Ron Garney on The Incredible Hulk.

Sal officially retired when he turned 64 years old in 2000; however he loves to draw and has continued to work as an inker. In addition to his work with Ron Frenz, Sal has collaborated with Guy Dorian Sr. on several projects, inking his pencils on COR (PKMM Entertainment), Rom: Tales of the Solstar Order and Rom: Dire Wraiths (IDW), Storm Kids and Tales for a HalloweeNight (Storm King Productions) and the forthcoming Blood Hammer (PKMM). 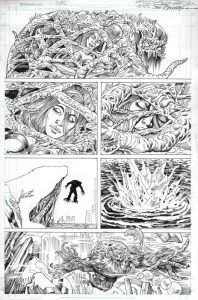 Sal’s return to the heroic alien cyborg Rom after three-and-a-half decades was very well-received, including by co-writer Chris Ryall, who explained “So, the chance for Christos Gage and I to write a Rom story that featured art by Sal was a longtime dream of ours, and one that was able to be realized after Sal and penciller Guy Dorian Sr. said yes to the assignment.”

Speaking with Ryall about his work on Rom and his career in general, Sal said, “I love to ink! No matter who it is. Each penciller offers a different challenge. Guy is very talented, and he is really fun to ink.” 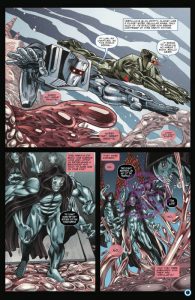 When Ryall asked Sal asked about “the tools of [his] inking trade,” Sal enthusiastically responded “Brush! Always brush!” For many years Sal utilized Windsor & Newton brushes, although he eventually felt that the quality of their products declined, so he switched to other types of brushes. On his more recent work he has used a number 0 brush of a type comparable to the Windsor & Newton.

I asked regular collaborator Guy Dorian if he could share his thoughts on what makes Sal Buscema’s inking so high-quality and distinctive. Guy explained that he appreciated how Sal utilized a think ink line so that the color does the work. Sal prefers to do “feathered strokes” at a 20 degree angle, wherein he pushes down on the brush with some weight, and as he pulls the brush he also lifts it up, making the line thinner. Guy explained that if the lines the penciller has put down are of the same weight Sal will utilize this technique to create dimension, varied line weight, and value scale in the finished work. 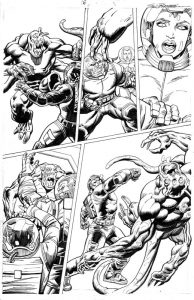 Guy also explained that, no matter who the penciller is, Sal will always make certain that the finished, inked artwork is perfectly clear, that there are no muddled lines, and that there isn’t anything that might interfere with the reader’s understanding of the images. Sal always strives to clarify everything via his inking. He is clearly an artist who gives a great deal of thought and care to the work he produces. 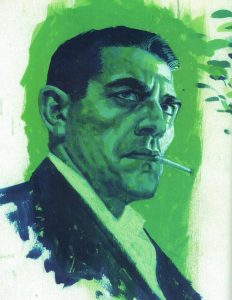 Congratulations to Sal Buscema for the well-deserved achievement of the 2021 Joe Sinnott Hall Of Fame Award.

Text written by Sal fan-since-childhood Ben Herman, who has contributed articles to TwoMorrows’ Alter Ego and Back Issue magazines, and is an administrator of the Sal Buscema: POW! fan group on Facebook.

The author would like to thank Jim Amash & Eric Nolan-Weaterington for their highly informative book, Sal Buscema: Comics’ Fast & Furious Artist from TwoMorrows Publishing, and to Guy Dorian for his invaluable assistance in preparing this article.