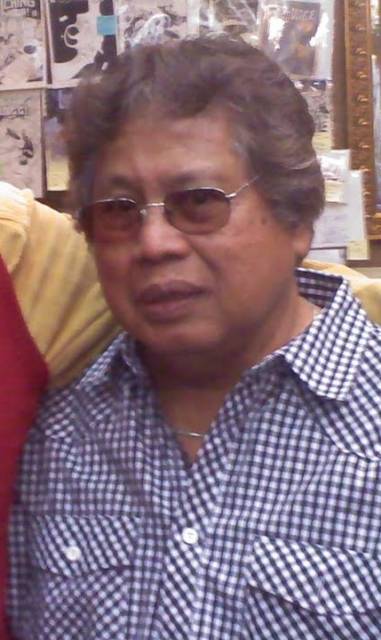 Most ink artists fall into one of two categories: “Chameleons” and “Stylists.”

Rudy Nebres is a stylist of the highest caliber. John Buscema called him, “one of the greatest inkers one would ever want to see.” Anyone reading comics from DC, Marvel, Warren and other publishers in the 1970s and ’80s knew when Rudy was the artist (inker or penciller). His lush linework and superlative skill with pen and brush stood out no matter whose graphite lines were underneath. So distinct was (and is) the Nebres style that many fans (including this writer) bought anything he inked, regardless of the penciller.

No surprise, then, that Rudy was part of the fondly-remembered influx of Filipino artisans, known for their inking chops and technical facility, which included luminaries like Tony DeZuniga, Alex Niño, Nestor Redondo and Alfredo Alcala.

Born Rodolpho D. Nebres (pronounced “NEH-brez”) in the Philippines on January 14, 1937, Rudy showed a talent and passion for art early on. After enrolling to study fine arts, he became a professional to help support his education, illustrating for Bulaklak Publishing. Eventually leaving his fine art training to continue his budding professional career, Nebres also worked for Graphic Arts Services and ACE Publications (The Philippine Islands’ largest comics publisher), among others.

The big year for American (and international) comics fans was 1972, when fellow Filipino comics great Tony DeZuniga journeyed back to the islands with DC Comics publisher Carmine Infantino and editor Joe Orlando on a talent hunt; they signed Rudy to embark on his US comics career. Beginning with the tale “The Exterminator” in House Of Mystery #210 (January 1973), which he both pencilled and inked, Rudy joined the pantheon of talented and skilled artists to contribute to  DC horror books like The Unexpected, The Witching Hour, et al., in the ’70s.

While still living and working in his native Philippines, Nebres met Marvel art director John Romita Sr., who was there on a similar talent hunt a year later. John and asked Rudy to join “The House Of Ideas” and soon the young artisan’s distinctive flair showed up in Marvel’s line of b/w magazines on characters like Shang Chi, Master Of Kung Fu, Iron Fist and the Golden Dragon.

For awhile, fans in both countries could feed their Nebres fix thanks to Kislap Komics (in the islands), DC and Marvel. Then in late 1975, Nebres decided to make the big move to the big USA, where people like Romita and editor/writer Archie Goodwin helped make his “transition to the ‘new world’ very warm and inviting,” according to Rudy.

From then on, readers could find the recognizable Nebres figures and/or inkwork in more and more titles, such as his memorable work over Gil Kane, Jim Starlin, Dave Cockrum and others in Marvel’s John Carter, Warlord Of Mars, The Rampaging Hulk/The Hulk! magazine, Doctor Strange and of course, Savage Sword Of Conan, where he contributed both pencils and inks, including embellishing the legendary John Buscema. In fact, one of Nebres’ personal highlights was being chosen to ink Buscema on Marvel’s magazine version of the Weirdworld series “Warriors Of The Shadow Realm,” one of their first painted comics stories, in Marvel Super Special #s 11-13.

Rudy freelanced mainly for Marvel and DC throughout the ’70s, lending his skill with pen and brush (and graphite) to Marvel characters including Red Sonja, Power Man and Iron Fist, Kull The Conquerer, Dracula, the Punisher, The Avengers and even Spider-Man, as well as DC titles Batman, Arion, Lord Of Atlantis and Who’s Who Of The DC Universe. Not content with just “The Big Two,” Rudy’s work graced a few books from Charlton and Pacific Comics too.

Fans were treated to black-and-white gold when Nebres was hired by Jim Warren to let his talents soar in larger-format b/w magazines like the now-iconic titles Creepy, Eerie and Vampirella, as well as 1984/1994, The Rook and The Goblin. According to Rudy, “My years at Warren were especially rewarding, as I received many honors and awards as best artist and best inker.”

Nebres’ artistic flair could be found on covers as well as the interiors from the ’70s into the ’80s, where his luscious lines in pencil and ink also lent credibility (and incredulity) to Archie’s line of superheroes like The Fly; Lancelot Long, the Shield; The Comet and The Mighty Crusaders.

After a year-long stint in Hollywood as a presentation artist for Marvel Entertainment Studios, working on Defenders Of The Earth and more, Nebres returned to New York in ’86 to join Neal Adams’ gang of greats at Continuity Associates, drawing everything from storyboards and animatics to more comic books like Armor, Megalith, Samuree, Toy Boy and Valeria, the She-Bat.

Following a decade at Continuity, Rudy returned to freelancing, which is what he’s been doing ever since. Though his comics output has been spotty since then, including scattered issues for Valiant in the ’90s, CrossGen and Beserker Comics in the ’00s and digital-only work for The Depths Of Gnar Collection in 2014, Nebres has kept busy. His loyal fans have commissioned scores of pinups and illustrations from him, some of which were collected in the softcover collection, The Art Of Rudy D. Nebres, published by SQ Productions in 2000.

Now (mostly) retired in New Jersey with his long-time wife Dolores, Rudy still travels to the occasional convention and delights his devotees with “just for fun” pinups and private commissions. Though their subjects run the gamut from supernatural to superhero to sci-fi to fantasy and horror, all show off his graceful and elegant figure work, anatomical expertise, intricate detail, sensual lines and consummate skill with any tool he chooses.

But in all of it, the unmistakable, inimitable and remarkable Rudy Nebres style comes shining through.

After winning an Inkpot Award in 2012, Rudy was elected to The Inkwell Awards‘ Joe Sinnott Hall Of Fame in 2017, an ink artist’s highest honor. 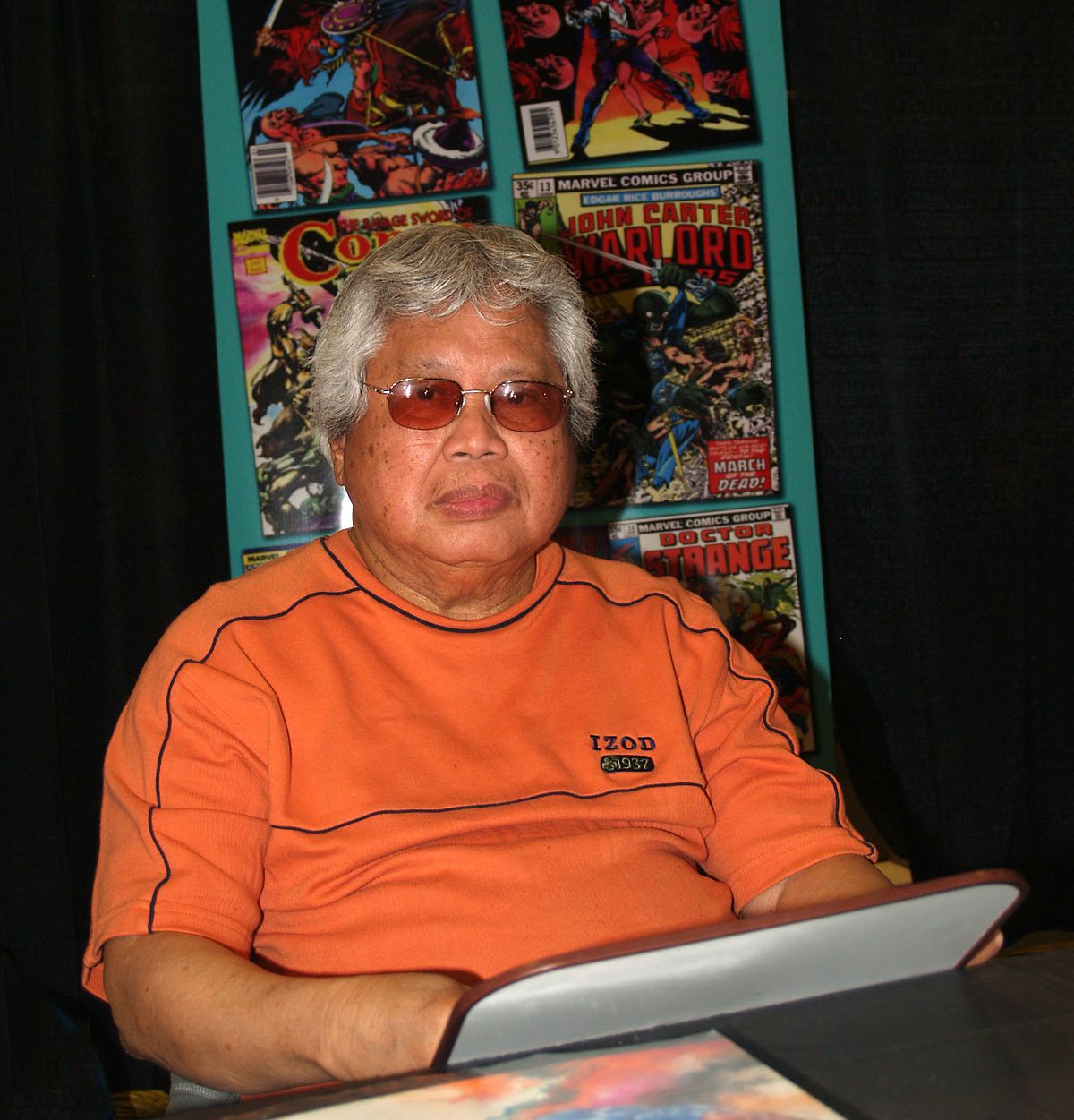 Text written by Inkwell Awards Assistant Director Mike Pascale (©2017 Mike Pascale and The Inkwell Awards). John Buscema quote from Marvel’s The Hulk! magazine #16, 1979. Sources for this article included The Art Of Rudy D. Nebres (SQP, Inc., 2000), from which all quotes were taken, Wikipedia, The Illustration Gallery online and Atomic Avenue. Photographs by Luigi Novi (at board) and unknown. Images courtesy their respective owners.