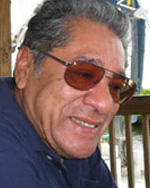 There are rare artists both loved by fans and admired by professionals. That’s Pablo Marcos, one of a shrinking breed who pencils and inks with equal skill.

Born in Ica, Peru in 1937 and growing up in Lima, Pablo Marcos Ortega was mentored by artist/novelist Juan Rivera Saavedra, who introduced the youngster to comics and some of the greats. Asked specifically of his inking influences, Marcos said, “I was impressed and admired the drawing styles of Alberto Breccia, Arturo del Castillo, Mario Uggeri, Alex Raymond and Burne Hogarth. The [last] was my idol and I still enjoy seeing his drawings.” 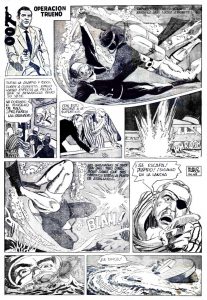 Largely self-taught, the talented Pablo began his comics career in the late 1950s, illustrating editorial and political content for local newspapers and magazines, including the Peruvian language strip of James Bond. Pablo became a chronicler, artistically capturing prominent and popular events locally and abroad, such as the death of “Che” Guevara, major earthquakes, an execution, and his favorite, many futbol (soccer) matches.

“My mind functioned as a video recorder,” he said, “the memories would remain vivid. I would return to the newsroom to draw all the goals and action from the games I had just witnessed.” 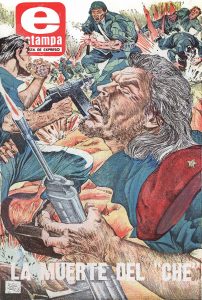 Moving to Mexico City in 1968 with his wife Norma and four children, Marcos worked for various papers and magazines, capturing current events, crimes and sports. Excelsior commissioned him to draw a history of FIFA World Cup matches.

Pablo and family visited New York City in 1970. Thanks to an artist friend and Pablo’s “determined and fierce” wife, he ended up staying. Unknown to him, she had brought his art samples from Mexico to show editors. Pablo visited publisher Jim Warren who sent him to art director (and later Marvel artist) Billy Graham, resulting in Pablo’s first US story, “Water World,” for the classic black-and-white horror magazine Creepy #39, which the artist says “revealed my inking style.”

After more work on Creepy, Eerie and Vampirella, Marcos spent a year at Warren-imitator Skywald on its Nightmare and Psycho mags. These stories were showcases for Pablo’s passionate pencils and intricate inking with brush, pen and sometimes wash and Craft-Tint (a type of paper that yielded two shades of “grays” using b/w lines which appeared by using a special liquid developer).

“I like to use everything that leaves a mark on the paper,” says Marcos. “I even use my own fingerprints to create special effects (they are one of my natural tools). In the days of prolific inking, I used a brush and nibs to produce very thick to very fine lines in a single stroke. Currently, I also use markers, nibs, and various pens that make the job faster and cleaner, but I cannot stop using the brush to draw.”

When Skywald folded, editor Sol Brodsky, a former inker/production man at Marvel, returned to his former employer, bringing Pablo with him. There the artist fully displayed his now-classic, über-detailed style in b/w magazines like Monsters Unleashed, Dracula Lives, and what many consider his magnum opus, Tales Of The Zombie. 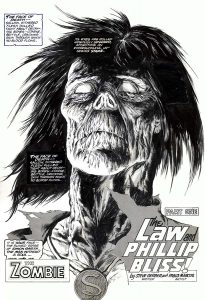 Working at Marvel off and on through the 1970s and 80s, Marcos began inking other pencillers. “For me it was a novelty to discover that in the USA, artistic work was divided between someone who did the pencil and other who was the inker. Of course, I understood why it was that way. Since I began to draw and publish in Peru, my native country, then Mexico and my first jobs in the USA, I always did both pencil and ink.” 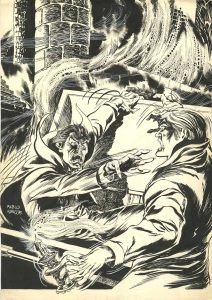 He had a popular run in Bronze-Age mainstays like Avengers (inking fellow Sinnott Hall Of Fame inductee Sal Buscema and a young George Pérez), Thor, Marvel UK books like Planet Of The Apes, and of course, Conan The Barbarian, where he helped bring even more dramatic energy to the great John Buscema’s powerful pencils; plus scores of covers, including his first color painting for Savage Tales #3, the original of which has still not been returned to the artist as of this writing.

Despite the common tendency for many American publishers to adopt and encourage a “house style,” Pablo says he was never asked conform to one or emulate another artist. 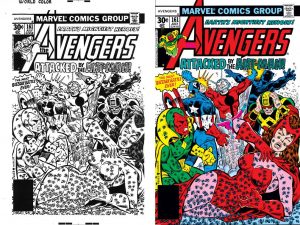 Around 1975, Marvel co-founder and former long-time publisher Martin Goodman hired Marcos for the new Atlas/Seaboard comics line. Pablo’s art for The Barbarians and Ironjaw linked him forever to the character, thanks to his signature dynamic poses, exaggerated musculature and lush, sweeping brush strokes. 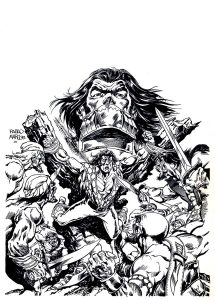 Atlas folded a year later but DC finally got wise to the Marcos mystique and hired the artist for a variety of genres. In the ’80s he lent his graphite and brush expertise to just about every major DC title, including Action Comics, Brave & The Bold, Detective Comics, Green Lantern, Green Arrow, various Justice League books, New Teen Titans, Warlord and Wonder Woman. In 1989, Pablo drew the inaugural six-issue series of DC’s Star Trek: The Next Generation. He then pencilled and/or inked most of the first 60 issues of the ongoing title’s 80-issue run, along with several ST spinoffs in the ’90s. 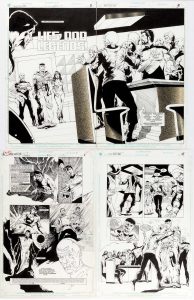 Who were some of his favorites to ink? “I only remember a few of the many artists [for whom] I have inked their pencils, such as John Buscema, Gil Kane, John Byrne, Ron Wilson; but one of the greatest satisfactions was inking George Pérez’s pencils. After embellishing the page, George’s detailed pencils continued to shine through. It was very satisfying to see the final work product come together.”

Adding to his global output, Marcos’s art graced several comic books in Italy, France and Canada plus Mexico’s Dragon publication. The world was a blank page for Pablo’s pencil, pen and brush.

Beginning in 1985, the artist had to cut his workload to take care of his wife Norma who was sadly battling cancer. The beautiful, fierce supporter of Pablo’s art and life succumbed at age 42 later that year. Unable to focus on pencilling, Marcos worked solely on inking for a while. 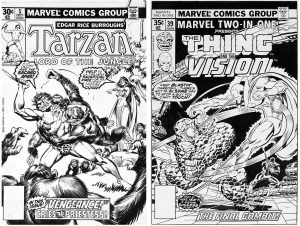 Two years later, Pablo met Columbian artist Myriam Giraldo Gomez through mutual friends and the two married in 1988. Soon after, the first of seven grandchildren followed. Re-engergized, Marcos plied his talents outside of comics to many publications like Waldman Publishing’s Great Illustrated Classics, small paperbacks packed with full-page illustrations (some credited to “The Pablo Marcos Studio,” as the artist had to hire some friends to help with the workload), Sports Illustrated for Kids and a life story of the legendary soccer player “Pele” (Edson Arantes do Nascimento) in Soccer Jr. 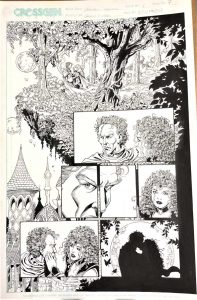 The end of the century and the 2000s saw Pablo branch out to publishers like CrossGen and others, plus reuniting with Robert E. Howard’s characters via Dynamite’s Red Sonja and the revived Savage Tales. During this time, Pablo adapted and streamlined his normally intricate style for the heavily-rendered-via-Photoshop color technology. Though retaining the trademark Marcos energy and vivacity, mostly gone were the beautiful pen and bush feathering, cross-hatching and textures from his earlier endeavors.

When asked about the shameful and insulting tendency for most of today’s publishers to eschew the inking process altogether in favor of the lifeless darkening of pencils for computer coloring, Pablo said, “They save on inking and sacrifice the contribution of inking techniques that accents and enhances the drawing in most cases. Sure, I have had to do many of those finished pencil pages, contracted for no inking, and I understand that with such spectacular ways of digital color they compensate a little for that missing ‘inking personality.’ Unfortunately, the digital color unifies all the drawings in such a way that no great differences of art can be seen.” 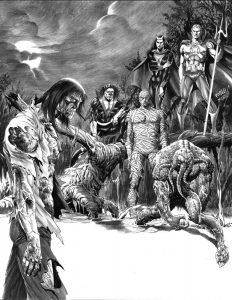 From 2010 to 2020, Pablo created more art and stories, such as: Edgar Rice Burroughs’ iconic Tarzan Of The Apes (with scripts by fellow living legend Roy Thomas) and The Land That Time Forgot; hand-painted pages for King Solomon’s Mines; The Vultures Of Khurason; and Red Sonja #100, also written by Thomas. Add to all that 136 sketch covers of Red Sonja and countless trading cards for Marvel, Upper Deck, Fleer and others, including Warren blood queen Vampirella and rock icons KISS. 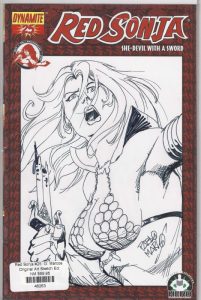 In 2020, Pablo battled and overcame prostate cancer, for which he credits his dear wife Myriam. “Without her, I do not think that I would have been able to continue with my life’s work and maintain the positive attitude that I have today and have maintained throughout the treatment.”

He still creates art for public and private enjoyment, including commissions, many of which can be seen on his Facebook page. Pablo also has numerous original concepts, features and unpublished work waiting for a smart publisher. His website has more artwork and history.

When queried for his favorite inking work, Marcos answered sincerely, “I cannot tell you about a specific inking job. The Zombie, Conan and Red Sonja have allowed me to express myself openly and deeply. The most important part for me is the Creation. [sic] The act of composing, focusing, printing emotions on the characters with their gestures, telling a story in drawings, designing a whole page and finally putting that INK stamp [caps his] on it is what gives it that indescribable sense of accomplishment.”

Adds the artist: “I am not able to imagine my life without drawing. I have been drawing for over 70 years and I hope I can continue to do so for many years to come.”

We at the Inkwell Awards couldn’t agree more. Pablo Marcos has rightfully earned his proper place in the Joe Sinnott Hall Of Fame and we are equally thankful and fortunate to have him with us. 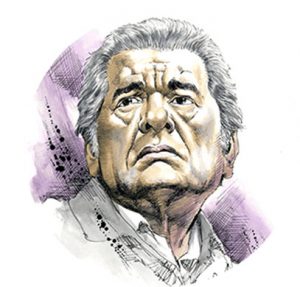 Article written by Inkwell Assistant Director Mike Pascale, with quotes and information taken from the artist’s webpage, the Grand Comics Database (comics.org) and correspondence with the artist, to whom he is extremely grateful.