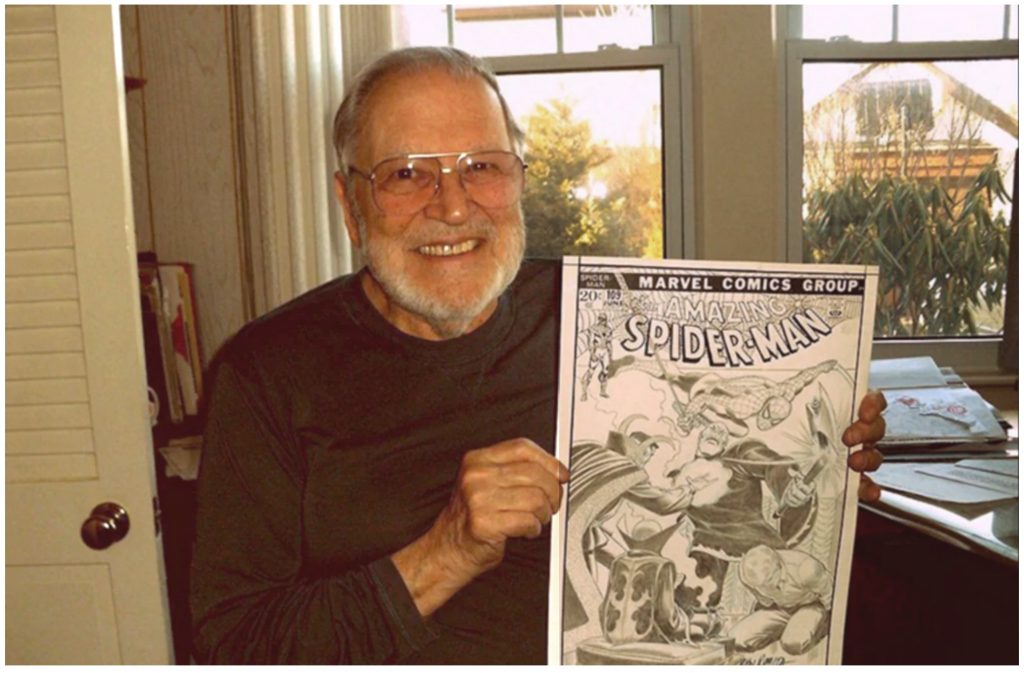 Few comic-book artists can follow a legendary co-creator on a top title and succeed. Fewer are able to do it multiple times after other legends and be successful. Fewer still become legends themselves.

That is John Romita Sr. (Though to anyone who grew up with his work, he’s simply “John Romita,” as he always signed his work.) 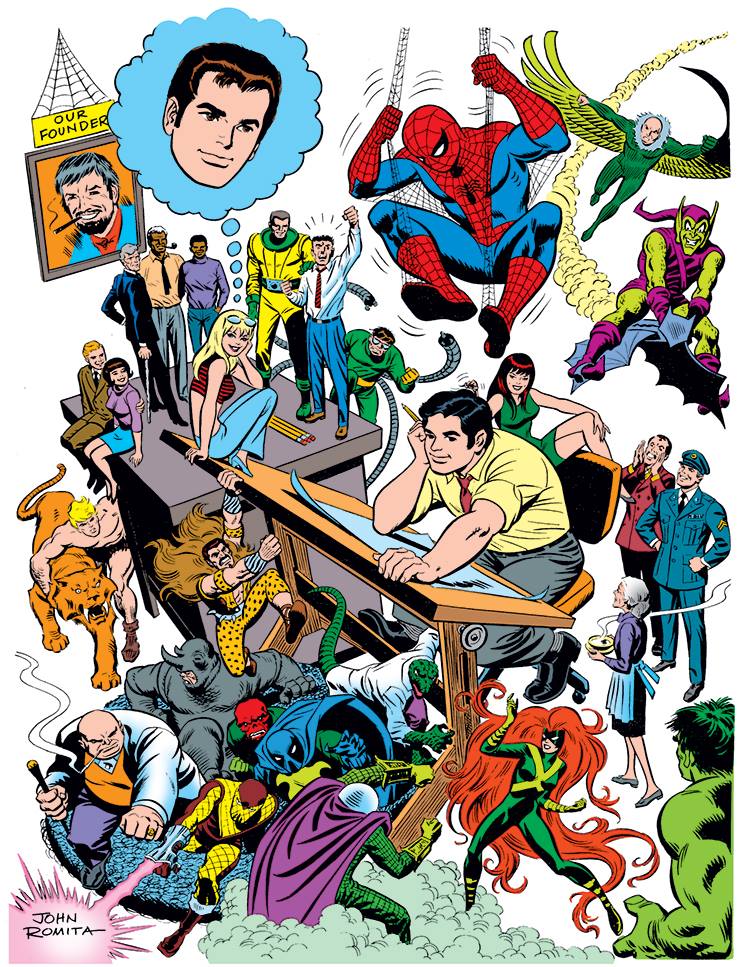 Storyteller, penciller, inker and art director, Romita had the daunting task of succeeding Jack Kirby on Captain America (twice!) and Fantastic Four, Steve Ditko on Amazing Spider-Man, plus Jim Steranko and (later) Gene Colan on Cap again, and Wally Wood on Daredevil. Each time, he made the characters his own. With Spider-Man and Captain America, especially, his version became the favorite of many fans who grew up with it (and even those who didn’t).

Because John’s career (encompassing seven decades) has been covered elsewhere numerous times, following are some highlights, interspersed with the artist’s comments. 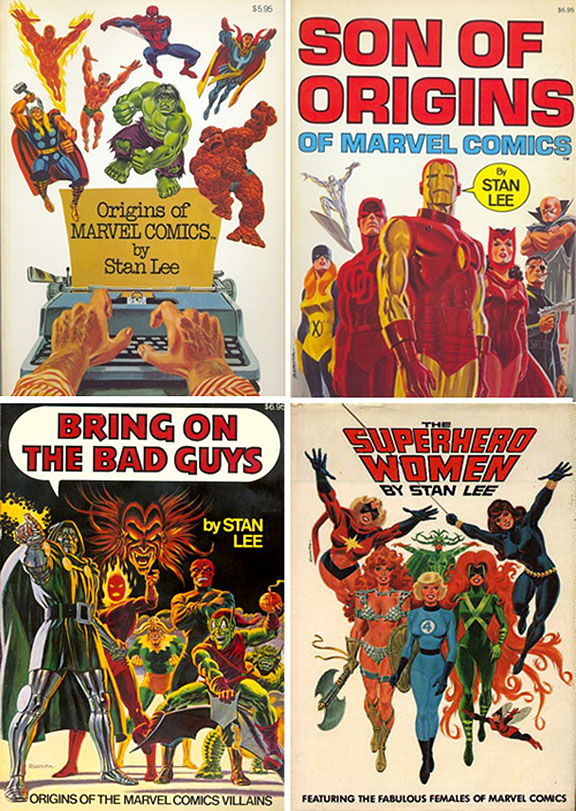 Born and raised in Brooklyn, NY in 1930, Romita began drawing at age five. Rather than following his priest’s advice to attend Catholic school and join the priesthood, he attended and graduated from NYC’s (high) School for Industrial Arts, where he met fellow future comics artists Joe Giella, Sy Barry, Lester Zakarin and others.

Like his Silver Age peers, Romita was influenced by the giants of his time and wanted to become a magazine illustrator. But his top two influences were comics creators Milton Caniff and Jack Kirby. In fact, Romita is one of the first artists to make the transition from comic-book fan to professional. 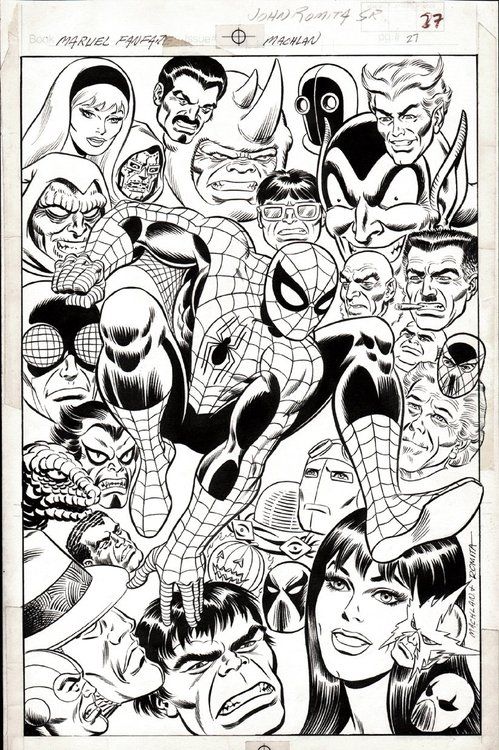 Of his artistic heroes, Romita said: “Caniff was my god. Before I got into comics, his Terry And The Pirates was my Bible…I think everything I ever learned was in those pages…I wanted to be like him…Everything I see is through Caniff’s eyes…I learned how to spot blacks. I learned that drawing a hand and getting the anatomy right was important, but not as important as getting the correct gestures that a hand makes.”

About “King” Kirby: “I was aware of everything Jack did from the time I was eleven…I’d tell my buddies, ‘This guy is great! Look at this stuff that’s popping out of the pages. Look at how he does that!’ Kirby was one of my idols. I thought the way he did things was the way to do everything.” 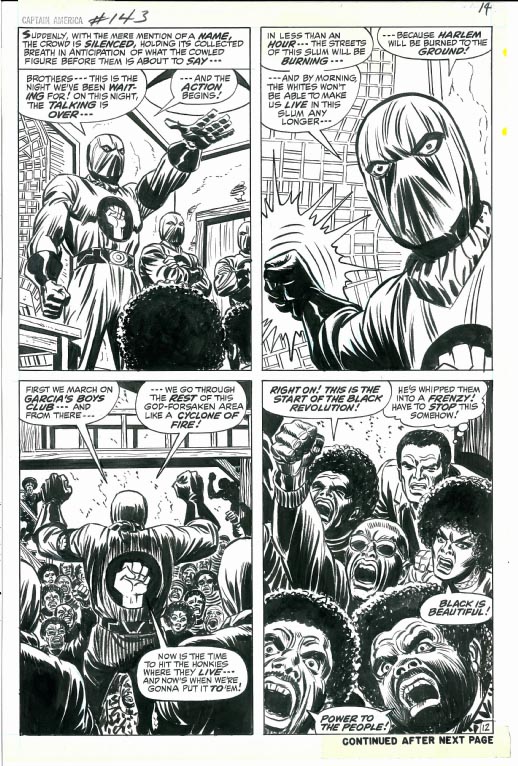 Romita’s first comic-book work was ghost-pencilling for former classmate Zakarin from 1949-50. Though Romita would later be known for his drawings of glamorously beautiful women, he initially struggled to draw them lifelike.

He drew romance comics for Avon and westerns for Trojan Comics. After a couple of his stories were butchered by poor inking, Romita complained to the editor, whose response was, “Who the hell do you think you are? This guy’s a professional. You could never ink as good as him as long as you live!” 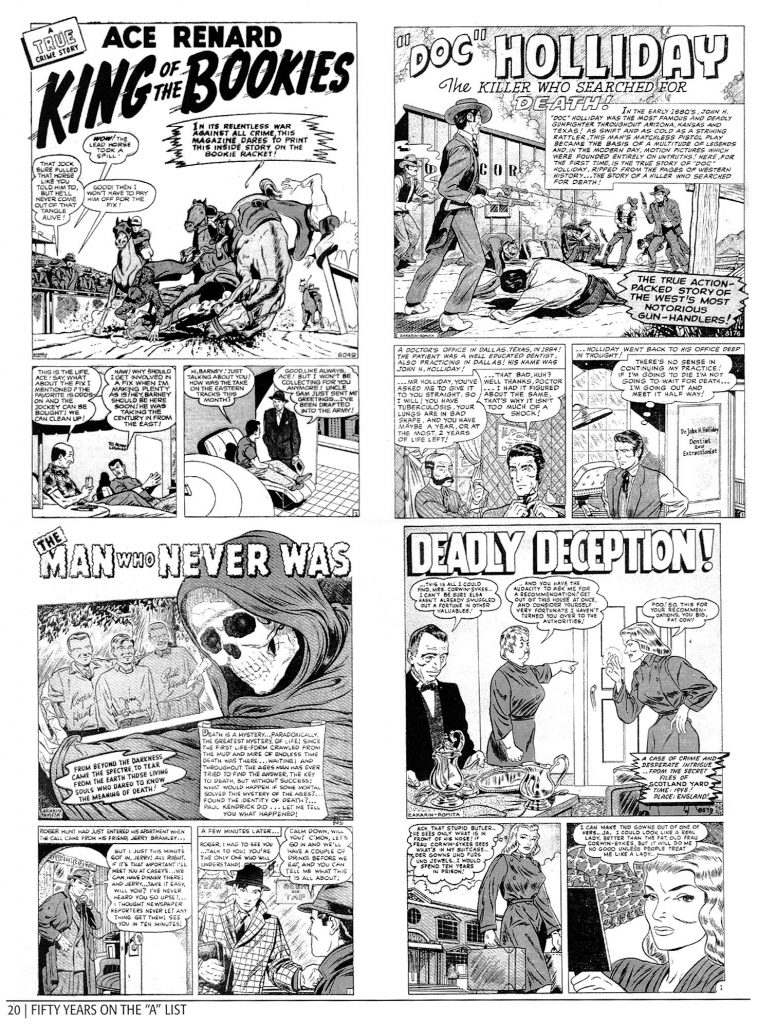 Zakarin also used Romita to pencil stories for Timely Comics (later Atlas, then Marvel) and editor Stan Lee. In 1951, John finally told Stan’s secretary that he’d secretly been working for him for a year; after which the young artist was given his first full pencilling and inking job.

Said Romita: “…I was about to tell her, ‘I don’t ink,’ and I thought, ‘I better not. she might not give me the script.’ So I just said, ‘Oh yeah, sure, I’ll ink it.’ I almost died. That was the first professional inking job I ever did.” That short story, “It!”, appeared in Strange Tales #4, cover dated December, 1951, the same as his second short story, “Out Of My Mind,” in Astonishing #7.

Soon after, Stan sent John to spend a day and learn from Timely-Atlas workhorse Joe Maneely, a storytelling master who could pencil and ink faster (and better) than most. “Maneely is the first guy I realized could put in bone structure with a pen line. In other words, he didn’t make everything round…He would do the whole thing with a thin pen line; then he would take a big, bold brush and do all the blacks. And for years after that I worked that way. I was a brush man at heart, but I couldn’t stop working the way he did for a while.”

During a stateside Army stint during the Korean War, Romita married his childhood sweetheart, Virginia, in 1952 (who ended up working on the Marvel production staff from 1975 to 1996). Upon his honorable discharge the next year, he returned to Stan at (now) Atlas and joined the ’50s revival of the Timely trio of superheroes he loved as a kid: Human Torch, Sub-Mariner and Captain America, the last of which became Romita’s with inaugural issue #76 (taking over the numbering from the Golden Age run). 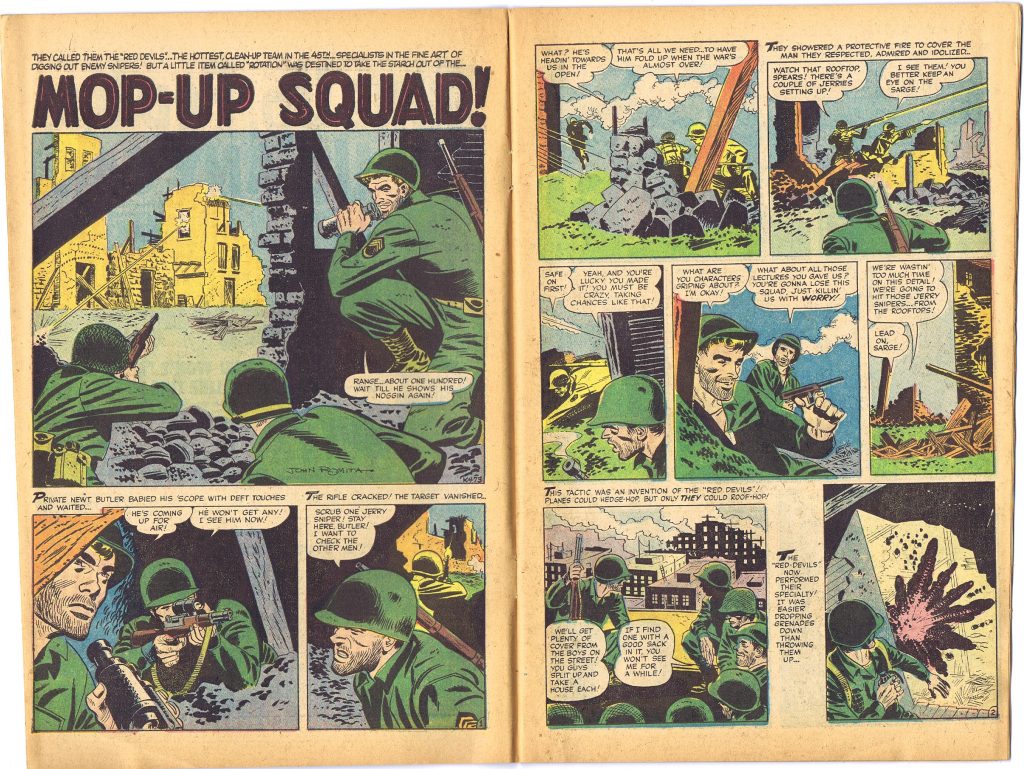 Now a better inker, Romita began adding more blacks and moody backgrounds to complement Cap’s new role as “Commie Smasher.” John was channelling his influences: “Oh, it was definitely Caniff!…I set out to do an absolute swipe of Kirby but Caniff kept sneaking in there…If I had been able to draw it exactly like Kirby, I would have.”

Regarding his early inking: “…when I was doing brushwork, I was at my best. Whenever I tried to do pen work like [Atlas-Marvel mainstay] Jack Abel, I had trouble…The best stuff I ever inked…are my [1950s] Western things…I did some with a number five brush, because I had heard that [fellow Timely-Marvel vet George] Tuska used a number five brush! It’s a big watercolor brush for big bold lines, and I did a seven-page Western story [“Gun-Shy!” from Frontier Western #7] over the weekend for Stan. It was a pencil-and-ink job…which for me is like lightning speed…But I did the best inking job I ever did inking because I was in a hurry.” 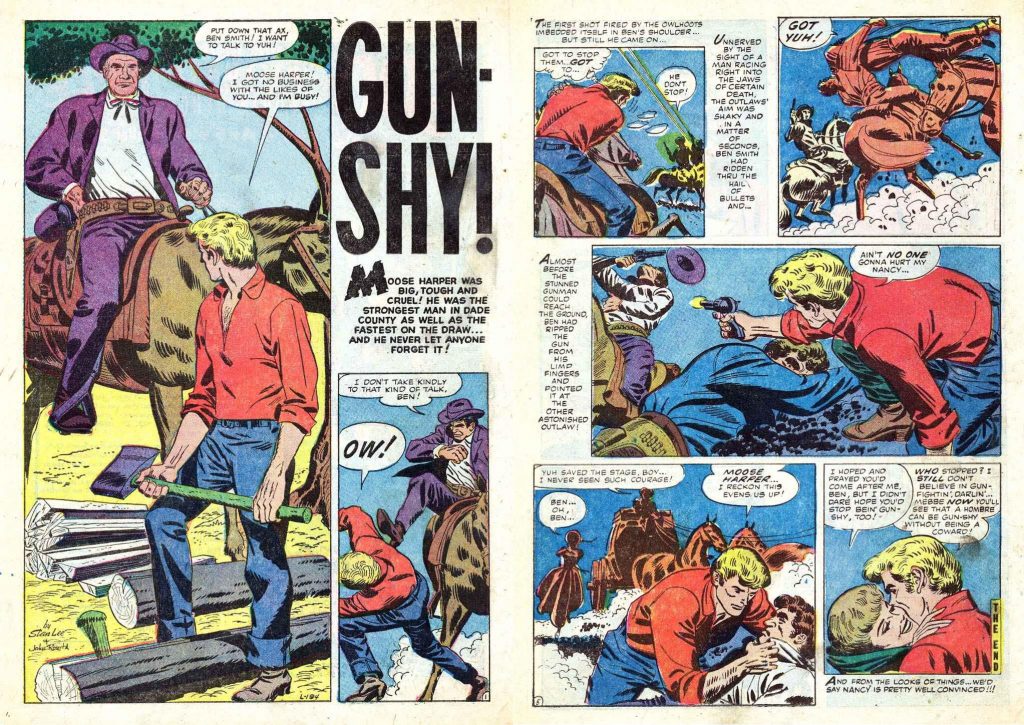 The superhero line was cancelled after just three issues. Comics sales continued dropping, along with Romita’s page rate (from $44 to $24 per page!), until in 1957, when Atlas basically closed its doors to new work, using mostly inventoried stories.

Romita moved to DC Comics, drawing and/or inking romance stories from 1957 to 1965. He felt that most editors (except the women who edited the romance line) were picayune and overly critical. Other than a never-realized proposal to redraw Ross Andru and Mike Esposito’s Wonder Woman faces, Romita never worked on any DC heroes. (He was later offered to succeed Ramona Fradon on Metamorpho, but he had already had a handshake deal with Stan Lee to work on Daredevil.) 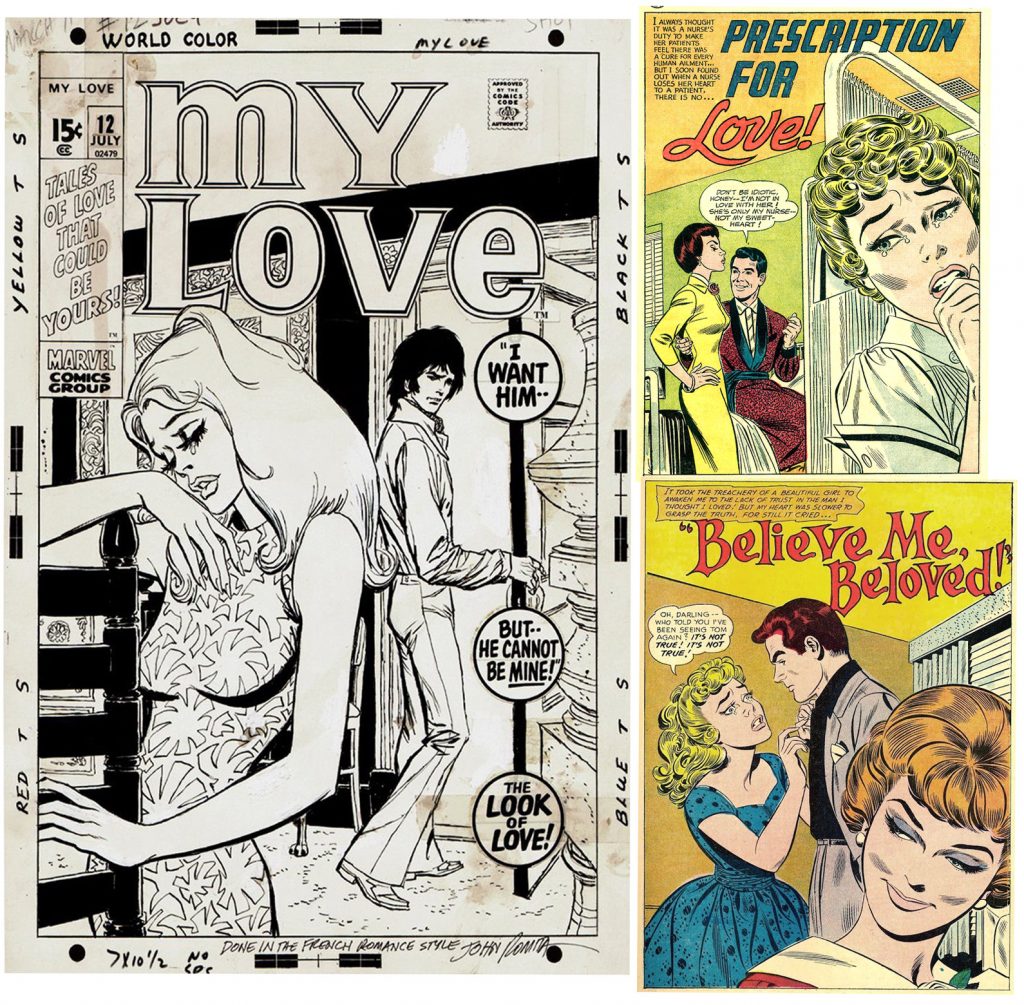 Romita was artistically burned out and felt he couldn’t pencil comics anymore. He was going to work full time at an ad agency but Stan offered him a salaried job at Marvel (while still getting a page rate for additional freelance work). His first job was inking Kirby’s cover to Avengers #23, which was censored by the CCA (Comics Code Authority)–the villain’s outstretched hand was deemed “too big and scary” and had to be scaled back. After inking that story and other books, he was resigned to inking only, concerned he would be stuck with lesser artists on second-tier titles. 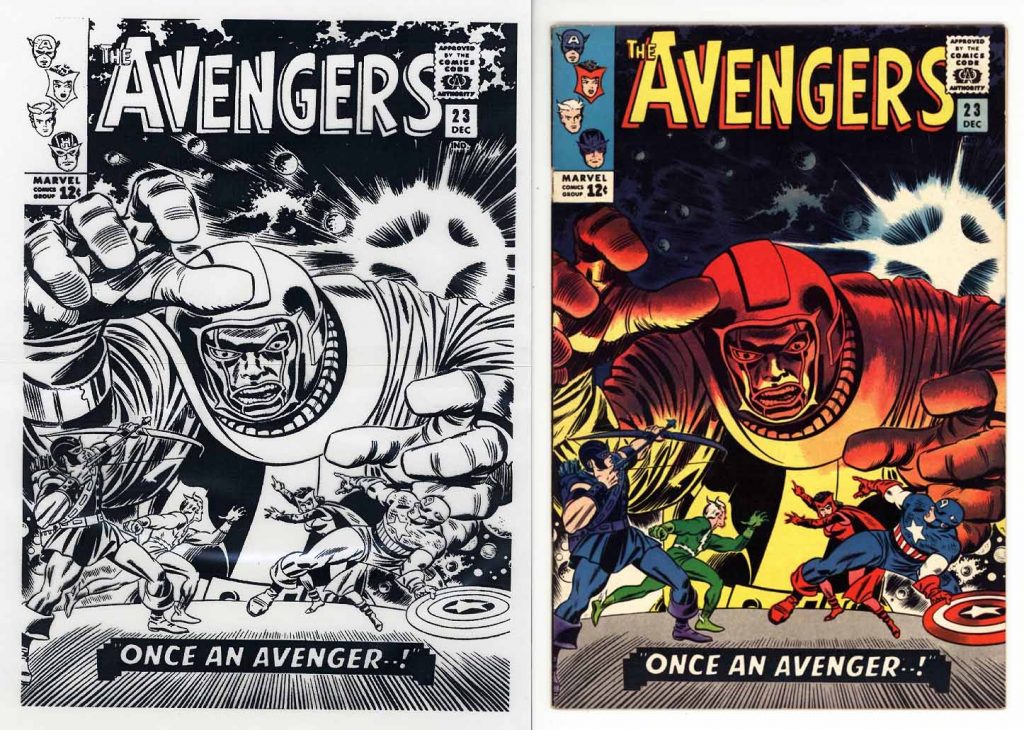 Then Stan asked John to draw Daredevil to improve on another artist’s work. (Coincidentally, Romita’s favorite childhood superhero was Lev Gleason’s original Daredevil.) Lee assigned him to issues 16 and 17, guest-starring Spider-Man, ostensibly to see how he’d handle the latter. Pleased, Stan asked John to replace departing co-creator Steve Ditko on the wall-crawler’s title, and the rest is comic-book history. 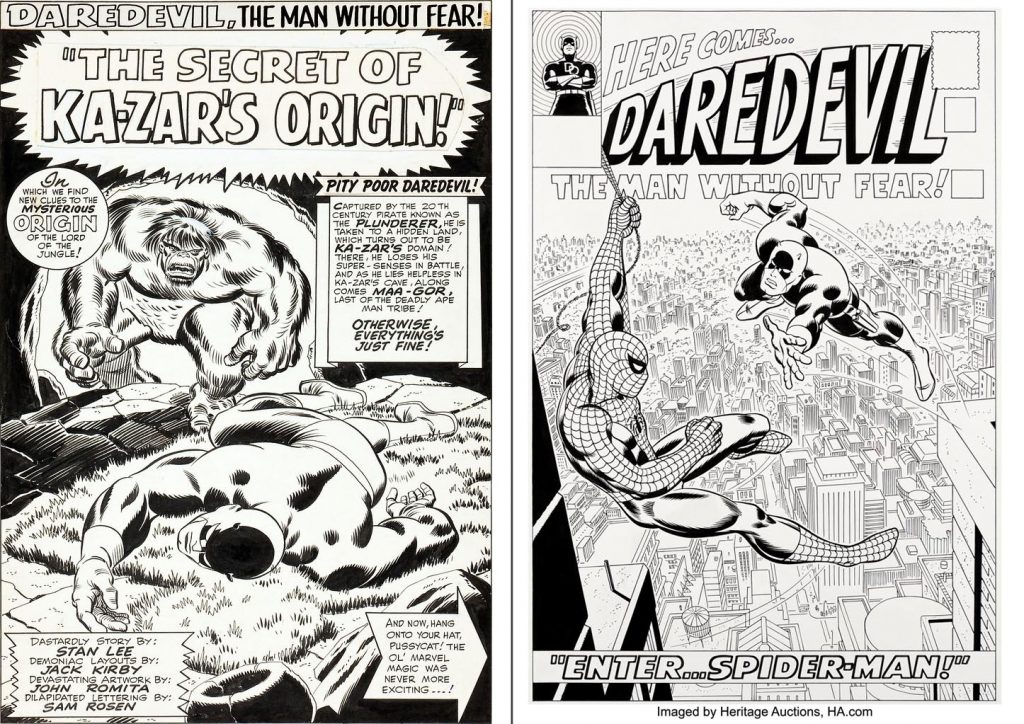 Romita felt uncomfortable taking it over from the co-creator. He struggled, unable to successfully imitate Ditko’s style, and was criticized by Stan and others for making Peter Parker too handsome and Spidey too muscular. But sales figures showed an improvement and he was allowed to draw it his way. “Jazzy” John Romita (as Lee often credited him) had arrived. 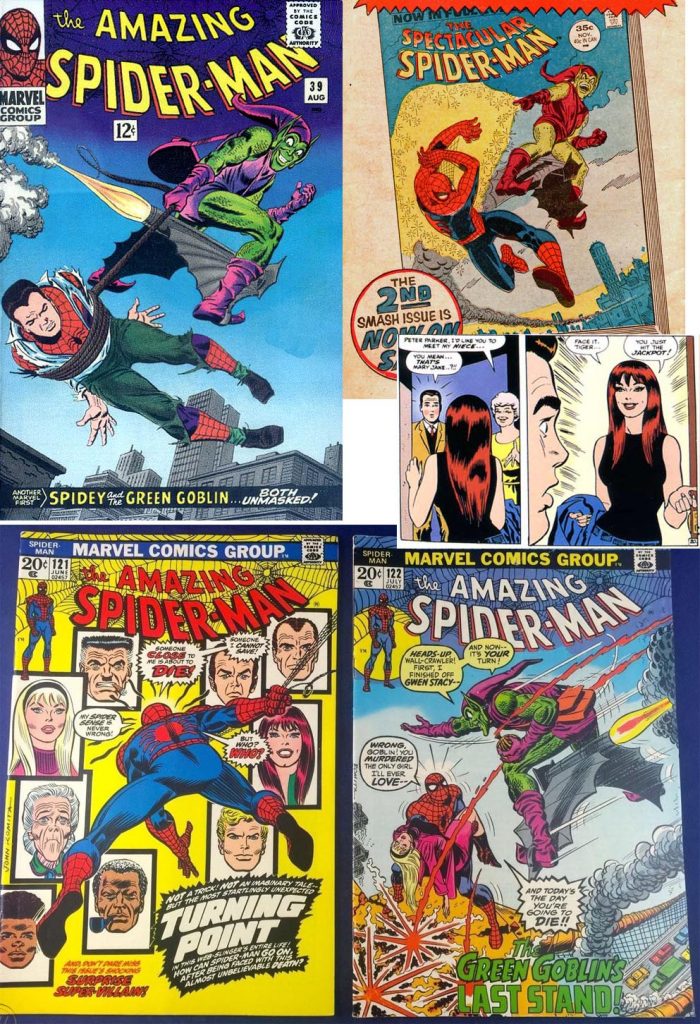 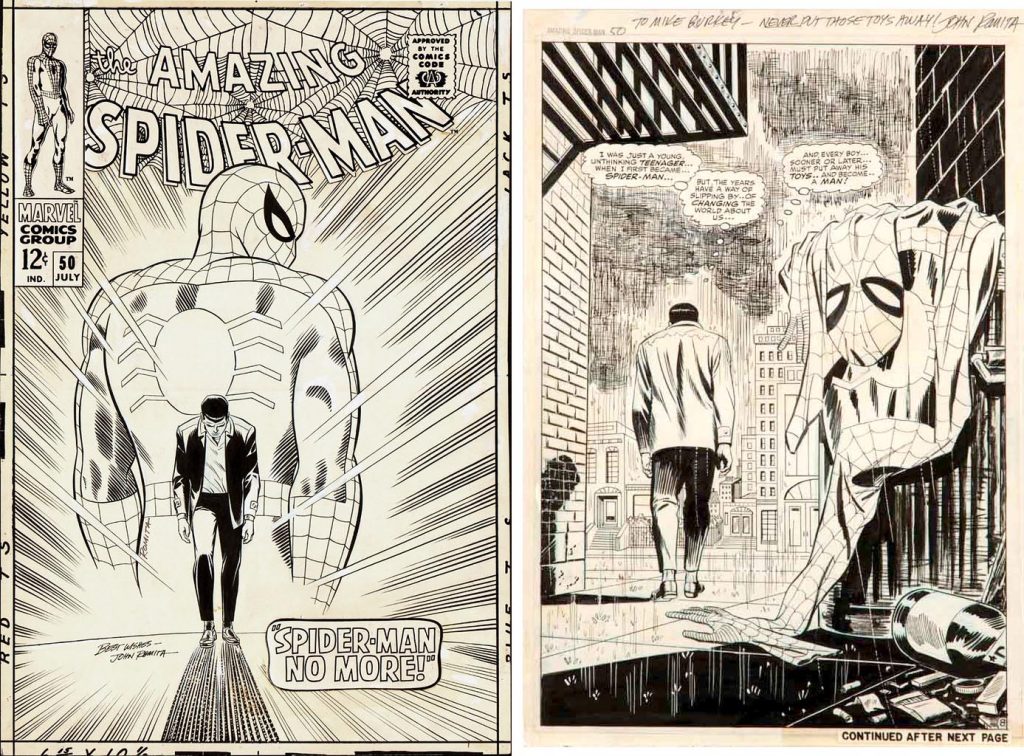 Since Amazing Spider-Man #39, John’s first issue, he’s co-created and/or designed numerous villains and characters (The Rhino, The Shocker, Kingpin, The Prowler, Captain Stacy, John Jameson/Man-Wolf and many others). He’s contributed several iconic, award-winning covers and legendary storylines, including the first full appearance of Mary Jane Watson (ASM #42), issue #50’s “Spider-Man No More,” the death of Captain Stacy (#90)  the non-CCA approved “drug issues” #s 96 and 98, and, most (in)famously, the deaths of both Gwen Stacy and the Green Goblin (#s 121 and 122). 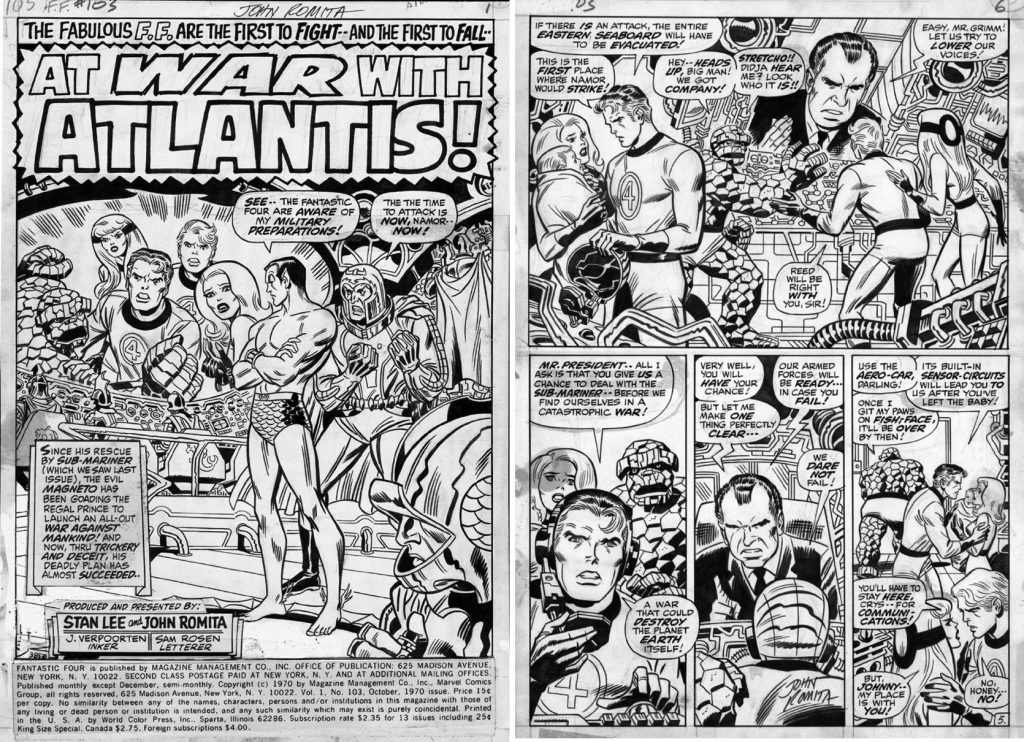 Romita stayed with the title for two stints, off and on, through issue 167, as penciller and/or inker. During that run he contributed at least 50 covers. In addition to aforementioned runs on Cap and Fantastic Four (the latter immediately after Kirby left Marvel in 1970), Romita was responsible for countless covers, as designer, penciller, inker and/or embellisher. 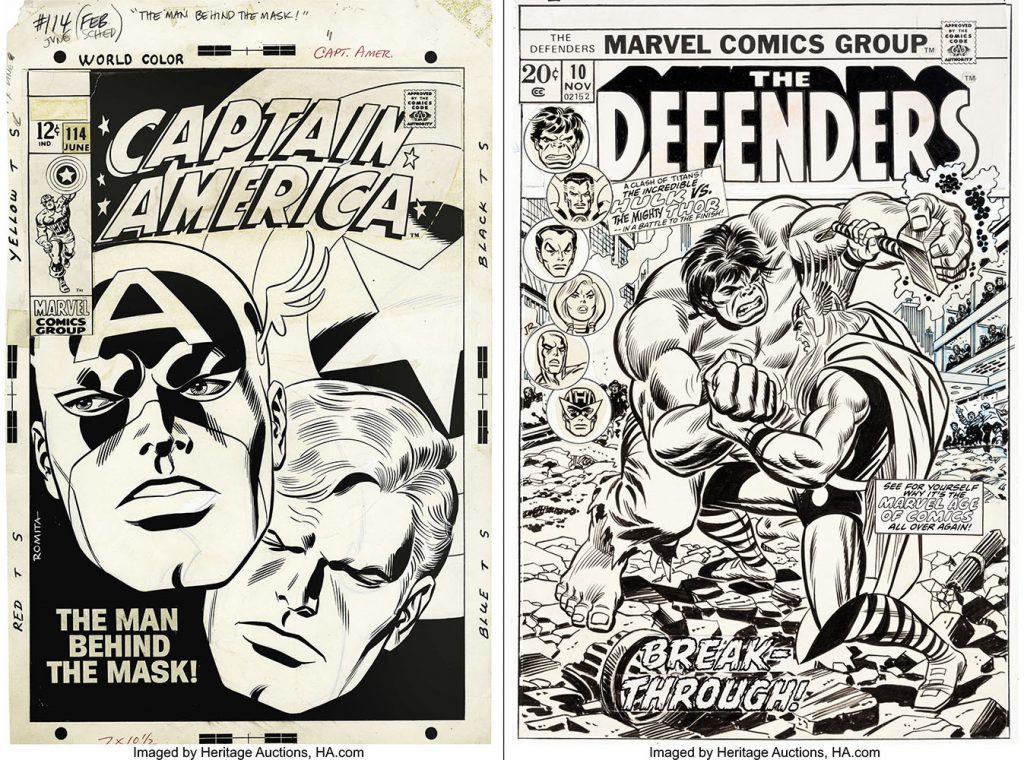 In the early ’70s he became Marvel’s art director, responsible (along with fellow legend John Buscema) for developing the post-Kirby Marvel “house style.” Romita was also charged with designing characters, correcting artists’ pages (including Kirby’s, which he disliked doing), advising and mentoring others, and designing and/or drawing countless special projects for the company. 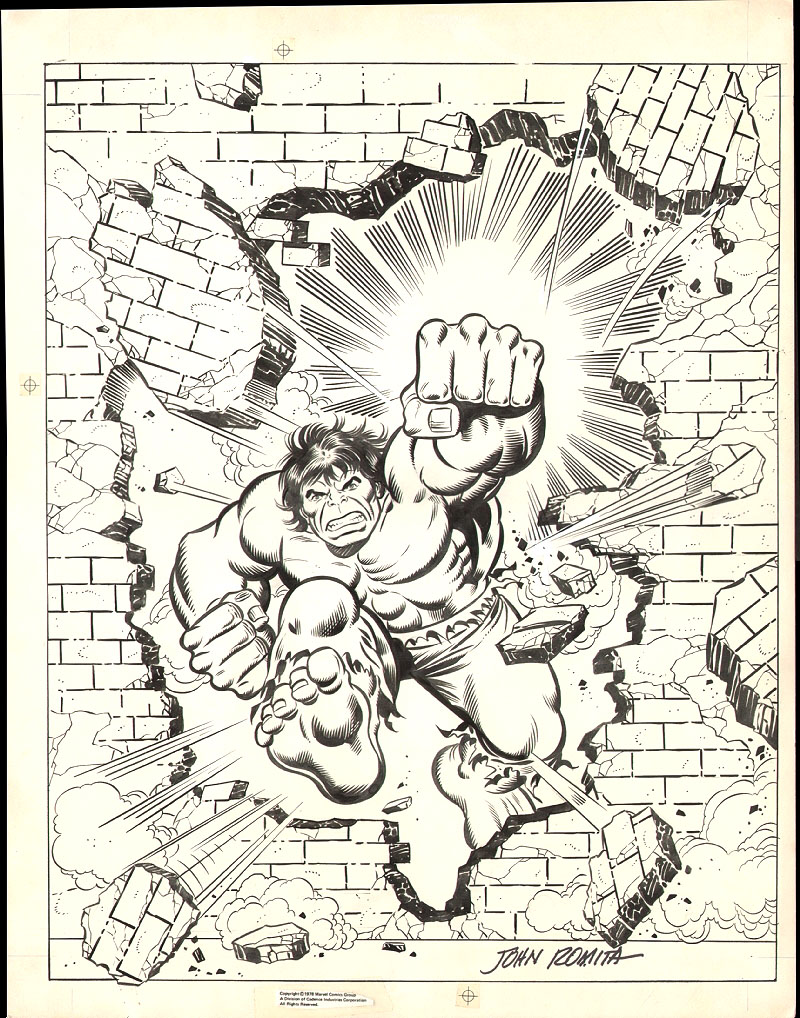 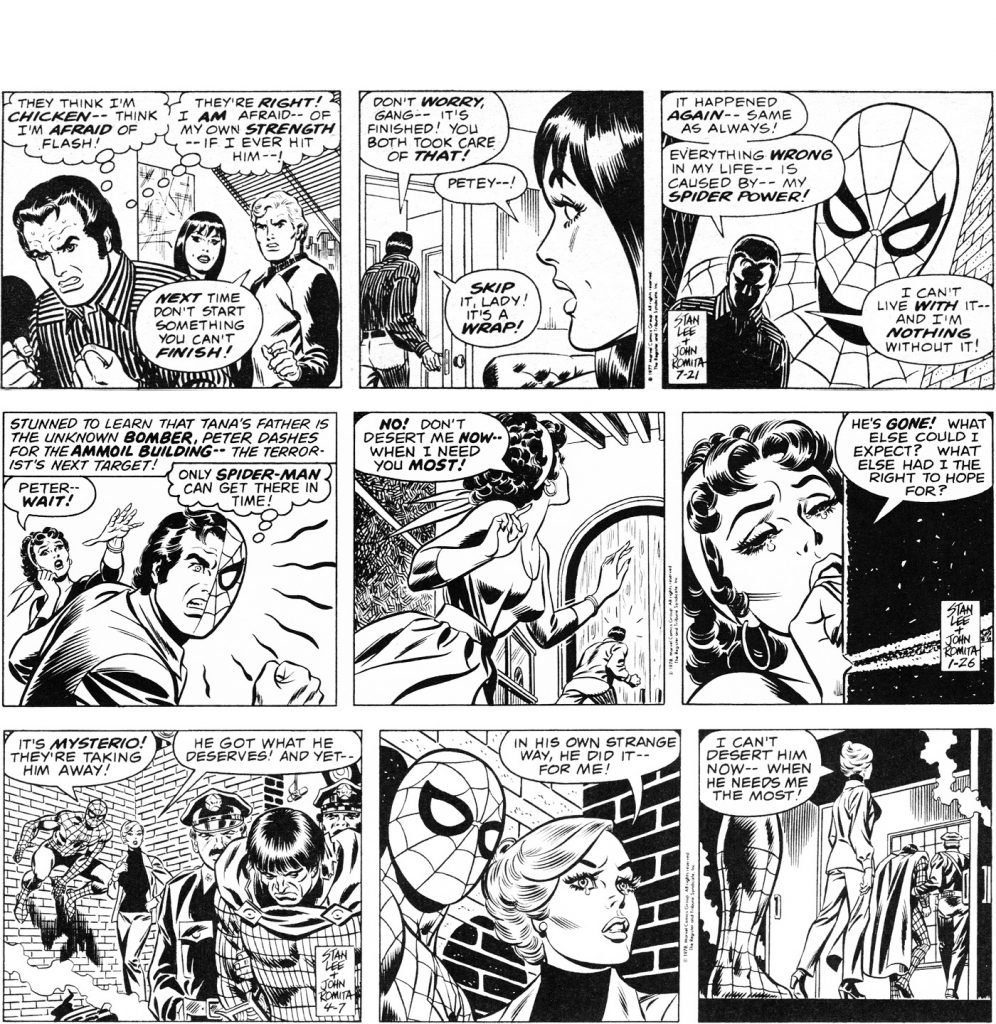 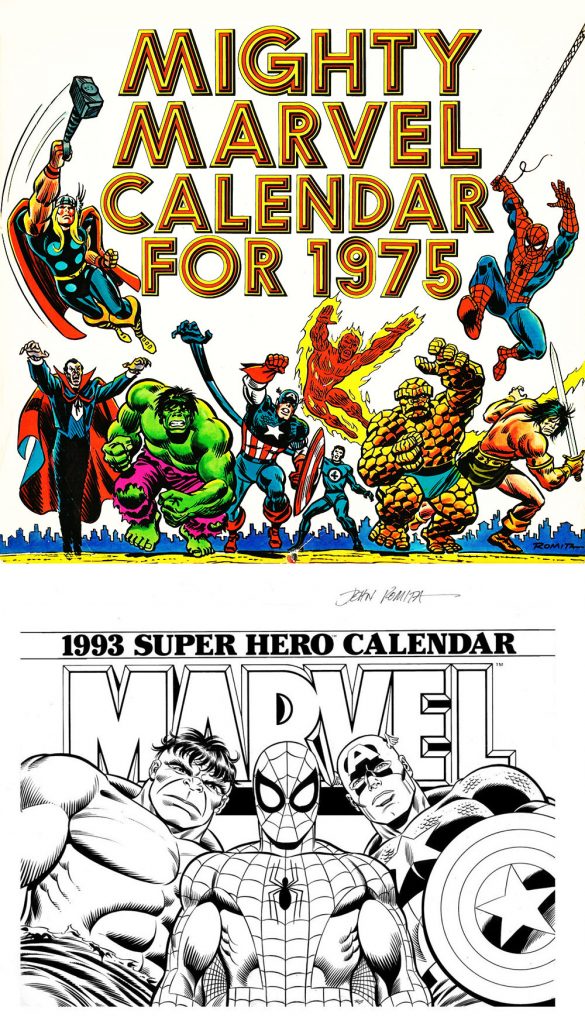 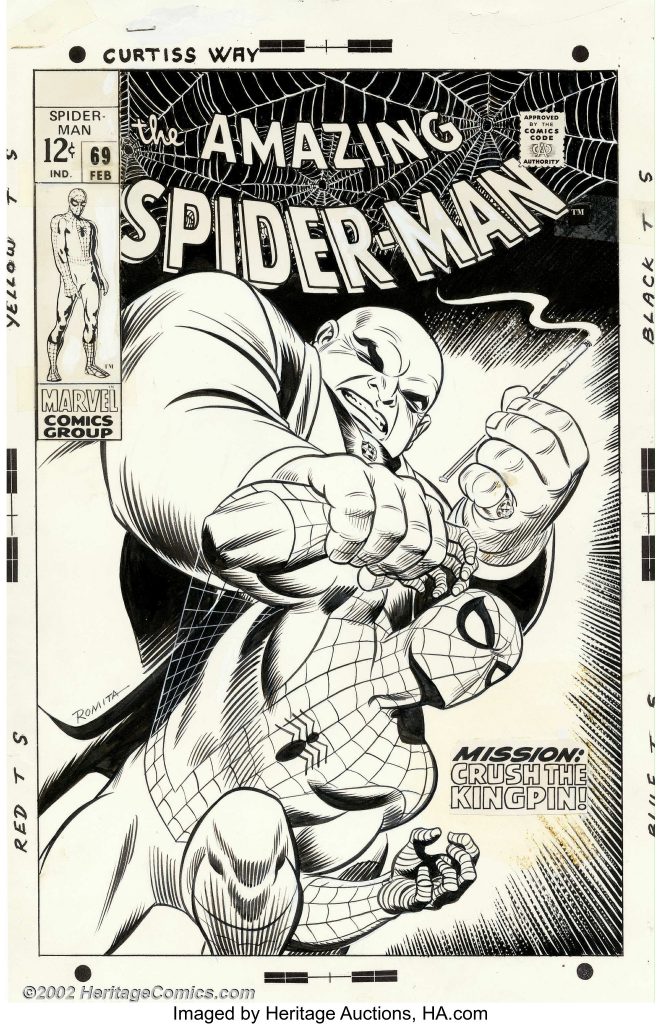 Ironically, Romita was as envious as he was admiring of artists like Kirby and Ditko and Colan for being “stylists.” He said at a convention that one could easily tell a Kirby building apart from a Ditko one because they infused everything they drew with a unique look. But the truth is that Romita’s art has its own identifiable quality, with idealized female and male faces, clean backgrounds plus crisp and clear storytelling, complemented by slick, immaculate inks. (Marie Severin once chided him, “Everything looks new in your stuff…For God’s sake, put a crack in a sidewalk once in a while.”) 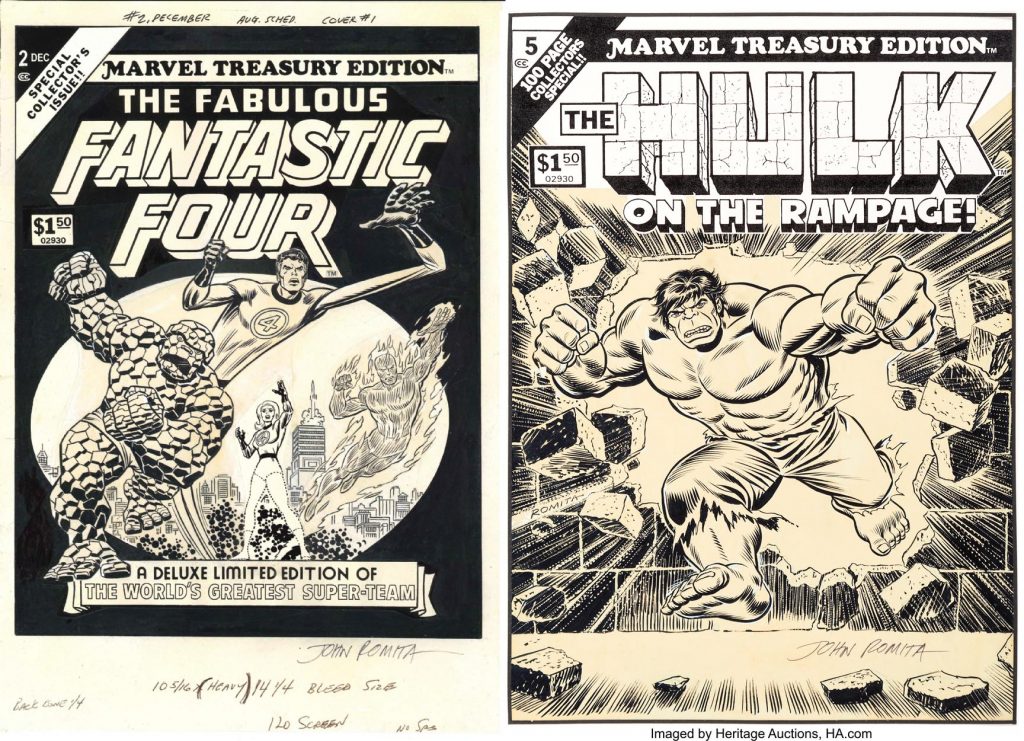 It is this same glamorized look that made Romita’s work not only stand out from his peers, but made it a hit with fans trying to escape the drab, boring and ugly realities of life. Romita’s idealized, heroic world is one which his legions of fans, admirers and fellow artists love to visit again and again. 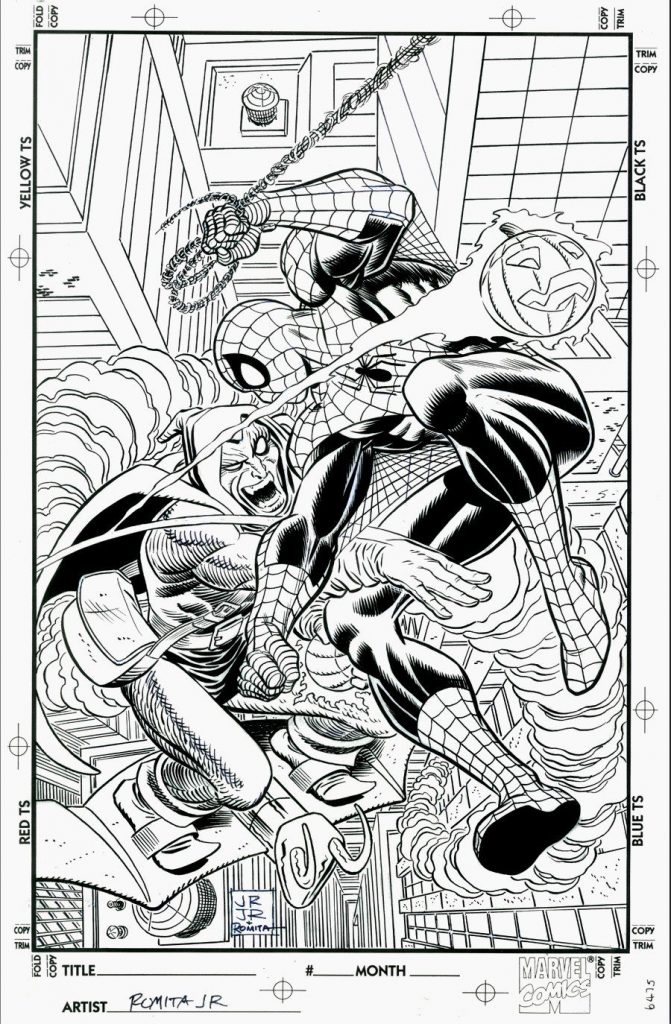 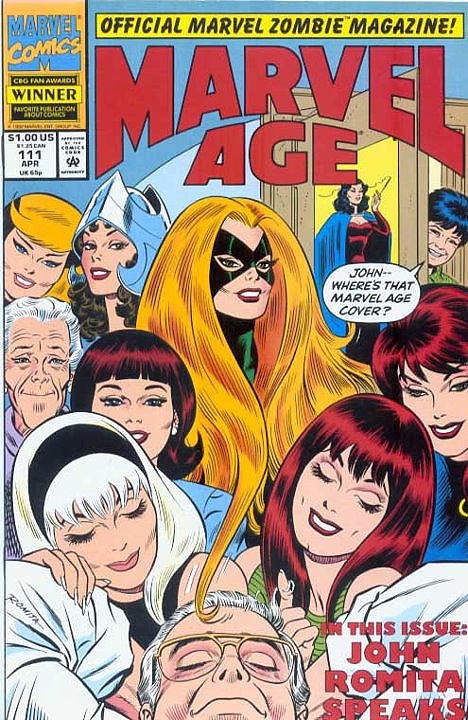 The fact that John Romita is as nice a guy as he is a skilled craftsman (and the father of John Romita Jr.) doesn’t hurt either. “If I’d inked every day, I’d be a better inker,” he ironically said in 2006. “When I didn’t ink for three or four months…it was like having to learn it all over again…the truth of the matter is, I don’t think I would have been as good as Sinnott anyway, between you and me. Very few people were as good as Joe Sinnott.”

Well, the Inkwell Awards committee thinks Romita has proven his legendary status and earned his 2020 Joe Sinnott Hall Of Fame Award in spades. 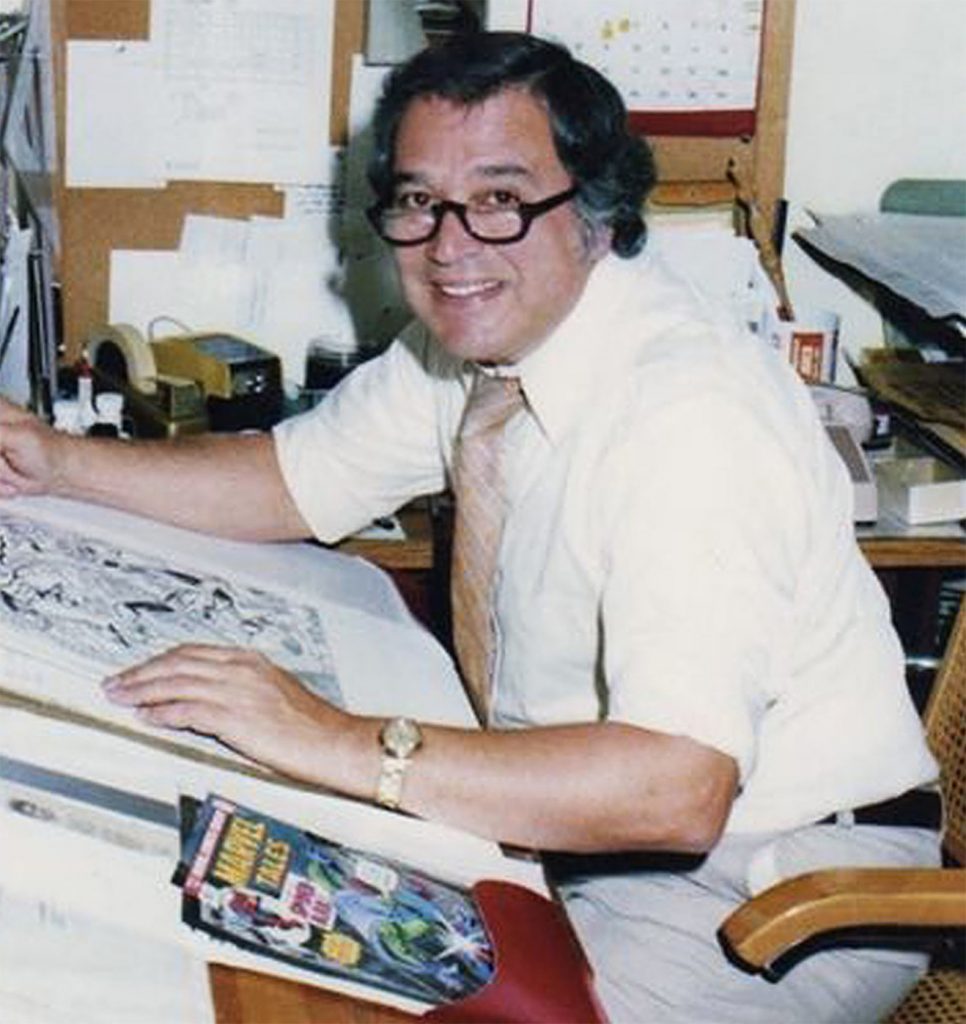 Article by Inkwell Assistant Director Mike Pascale with quotes and information taken from the book, John Romita And All That Jazz, by Roy Thomas and Jim Amash (TwoMorrows Publishing), Wikipedia, and the writer’s personal experiences.