There’s so much exciting stuff happening at the Inkwell Awards and I wanted to share it with you all!

It’s been a rough couple of years, for everyone. Fundraising was more vital than ever with the absence of shows for a time and the weak US economy and the regrettable state of high unemployment affecting our donations and how they sold on the auction block. Thankfully, even with some smaller returns from both donation sales and Inking Challenge events we were able to fund our Dave Simons Memorial Scholarship Award (promptly paid this past fall to the Kubert School), so all additional funds are for our trophies, auction fees, shipping, travel and other operational expenses.

We only attended two shows in the transitional 2021 but that was as much to do about my personal work schedule and health keeping me home as the travel amidst the Covid variant-laden environment. But we have, so far, three conventions confirmed for the new year and they are regular stops of ours with The Old School Comics Show on April 23, Garden State Comic Fest July 9-10 and the Terrificon July 29-31, so far. 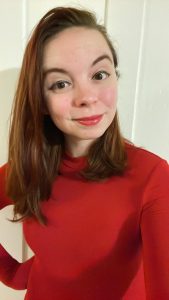 Speaking of shows and fundraising, some may have noticed that life hurdles like job schedules have challenged us with having a Ms. Inkwell spokesmodel at all show appearances starting in 2019 but especially during the pandemic. But during the carpool road trip to the Joe Sinnott memorial this past October with former Inkwell member and supporter Joe Goulart, Joe suggested that we talk to Brie Danas as a new addition to the team.

Brie is 26, attending college and she just moved to New Hampshire, so she’s a local New Englander which is within drivable distance of many of our shows. She’s been regularly involved with the comic book/pop-culture convention scene for a decade and has been a cosplayer starting in 2011. This means that she has familiarity with shows, the fans and the creators, having developed relationships with many along the way.

She loves this family community and is very excited to join the Inkwell Family which allows her to help give back to many deserving members. Spokesmodels are on the front lines in artists alley, acting as liaisons and the face of the non-profit and largely involved with it’s fundraising more than anyone else, whether collecting generous donations from creators or selling merchandise from our booth space (but also ready & eager to take pics with fans).

She is passionate about helping to recognize the exceptional work of current inkers (along with their pencil partners unless they ink their own pencils) and veteran artists for their lifetime of career achievement, and helping make students’ dreams come true with entering the comic book field through scholarship aid. Brie’s academic and work schedule has the kind of flexibility allowing her to attend many con events.

After the holidays we’ll have her first photoshoot pics and, working besides Bob and the vet spokesmodels Hailey Skaza-Gagne and/or Kathy Denise Taylor, she will be training at her first shows in 2022.

And still on fundraising, I wanted to praise my auction team of auctioneer Ray Burke from my core committee and curator Michael J. Prast, my senior contributor who handles all donations, scanning and packing & shipping. I used to choose items from my donation inventory tracking chart and type up descriptions for the listings (I would set starting bids or refer to committee member Erick Korpi for original art items).

During our short run of auctions this past fall (after a way too long break from them), not only were we synching as a team but Ray has also recently typed up new descriptions due to my insane schedule. So when our fundraising auctions resume in mid to late-January we will continue that mostly biweekly schedule on an ongoing basis with occasional small breaks so we can offer up a lot of donations from the last few years. And the new shows later in the year will allow us to bring in newer art items.

This seems to be the most-efficient plan and it’s hard to believe that most of this work used to be handled for years by a single person like Michael Kellar or Bob Shaw before him, burning them out. I can tell the newbies stories of incredible feats by these seemingly fictional and larger than life auctioneers, the Inkwell Legends!

Since the beginning, our Inkwell website has been maintained by Tim Aslat and financed by Daniel Best, both based in Australia and both among our longest-lasting senior contributors. We have made efforts a few times over the years and now through our senior contributor & webmaster Steven Freivogel to break away and be self-sufficient in this area. We currently have had one problem or another blocking the venture. But right now things are closer than ever to finally reaching that goal. 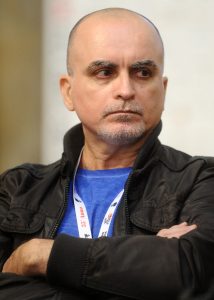 Our next Sinnott Inking Challenge event shines the Spotlight on…Mike Deodato, Jr.! Celebrating the 80th anniversary since her debut appearances, Wonder Woman will be the rendered iconic character by Mike, a character who he had a memorable series stint early on in his career. In fact, MIke was so excited to be invited to participate and support us that he immediately drew up the exclusive image! Thanks to the efforts of Erick Korpi, Joe Prado and Mike Pascale several pro ink artists were contacted, invitation only (and with DC Comics oversight), to the traditional limit of 24 boards, signed & numbered with COAs, of blueline original inked art to be auctioned off in the late spring.

Some of you may have noticed our host-show dilemma recently. The dilemma is that we currently don’t really have a host-show. As many of you know, Heroes Con in Charlotte, NC acted as our first host-show from 2011 until 2018 when we informed promoter Shelton Drum that we would be changing venues because another show was willing to cover most of the travel expenses that we were currently paying and it was a lot closer to home…a difference of 14-16 road trip hours versus about 6!

We had a good ceremony in 2019 that weekend, albeit filled with more bad luck than even Murphy’s Law could understand, but following the pandemic the show hadn’t communicated with us and it didn’t have plans for producing any new shows for the foreseeable future. So for the last two years we have handled all results announcements online in press articles.

This has given us more flexibility and with me and my assistant director Mike Pascale being super busy with work assignments we’re slightly behind the 2021 operations schedule so that flexibility is much-appreciated. However, for the future, for after 2022, we’d be open for discussions if convention promoters want to discuss hosting us, whether as a one-shot ceremony on rotation or as a short or long term arrangement. They can contact me anytime at dmralmond@gmail.com

Since the beginning, after I created the Stacey Aragon Special Recognition Award or SASRA, (originally just SRA), there’s often been confusion about “who is Stacey?” and even what it is, including the award recipients. It’s our second most-prestigious lifetime achievement award after the Joe Sinnott Hall of Fame, but it comes with more of an explanation and allows some notable creators attention for their work, some of whom might not be eligible to win the Sinnott one. To make Stacey, the award and it’s terms clear from here on in “Mighty” Mike Pascale and Stacey’s widower Dave “Ragz” Hanson assisted me in adding an informative, new SASRA page to the website. Thanks, gents!
Speaking of which, we’re about ready to prepare the nomination committees for the internally-nominated lifetime achievement awards candidates and the separate nomination committee for the ballot categories next. I’m really and honestly thrilled about our progress and achievements of late as we enter our 14th(!) year at this! Our Inkwell Family is filled with many dedicated individuals, some from the beginning with me, who have selflessly put in their invaluable time to make this fledgling organization into a long term reality in spite of all of the original criticism and doubt. We still make mistakes but we’ve learned a lot and we’re heading surely FORWARD & UPWARD! BRING IT ON 2022!
Bob