While some artists earn their inking stripes over decades of comic book illustration, the second 2018 Inkwell Hall of Fame winner, Bob McLeod, has earned the nod due to his excellence in art finishing and contributions to “The New Mutants” and other well-known series on which he has worked in a 40-plus-year career. 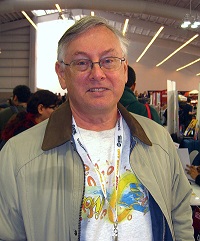 Bob McLeod was born in Tampa, Florida, on August 9, 1951, and was educated at the Art Institute of Fort Lauderdale.”Mort Drucker is my art god. I was very influenced by him early on, and basically wanted to be him,” said McLeod in an interview. “I also studied Neal Adams and John Buscema for their rendering when I was learning to do dramatic comics. There is, of course, Frank Frazetta and a host of other great artists that I pored over as well.” [All subsequent quotes are by McLeod unless otherwise noted.]

While McLeod admired his fellow continuity artists, the art of Jean Giraud, aka Moebius, on “Lt. Blueberry,” stands out as an inspiration.

“As my hero was Mort Drucker, I wanted to work for ‘MAD’ magazine. I am a good caricaturist as Mort is, but there could only be one Mort and my other goal was to work on a syndicated comic strip, but I discovered that as I worked at Marvel on ‘Crazy’ and other books that I really enjoyed comic books too.”

His career began with the encouragement and recommendation of Neal Adams, which landed him a job at Marvel Comics in the production department correcting lettering, right beside top inkers Mike Esposito and Frank Giacoia. During the course of his early career at Marvel, Esposito told McLeod he could learn to be an inker faster than he could to be a penciller, so he began to ink backgrounds for Mike. Bob was soon rewarded with his own inking assignments, via his first published work in “Crazy” #5 in 1974, as well as on books like “The Deadly Hands of Kung Fu,” “The Defenders” and “Jungle Action.”

“Bob is a good caricaturist,” said Neal Adams. “So when he worked for me at Continuity [Associates], I had him do ‘The Jimmy Carter Coloring Book,’ which turned out great as Drucker was supposed to finish the book but could not. [Bob] worked with us for a year and a half as part of the studio.”

“One thing I learned from inking so many different artists was that every job required something different. As I could draw as well as I could ink, I often made the pencils look better than [they were]. That said, inking Golden was different than inking Colan and both were different than finishing Milgrom’s work. For different artists, depending on the tightness of the roughs, I either became a good tracer or a good finisher and the results were what I wanted them to look like.”

Bob McLeod put his stamp on the Marvel Universe with his co-creation of The New Mutants in 1982. The mutant super-team was originally introduced in a graphic novel written by Chris Claremont and both pencilled and inked by McLeod, who also drew the first three issues of the following comic-book series.

McLeod said that the graphic novel’s production schedule overlapped with his honeymoon which created problems with the shipping schedule. Editor Louis Simonson kept her promise to Bob to allow him to ink the book himself, all of which resulted in frustration for the artist. “I had to give up doing pencils for the series due to the monthly schedule of the book. With the extra workload, I felt like I was doing substandard work and I did not want to do that.”

With the recent “New Mutants” movie being developed by Fox, McLeod has high hopes. “I’m very excited about the upcoming movie, which of course I never dreamed would ever actually happen. While I would of course love to make a cameo appearance, and I assume I’ll at least get a screen credit as co-creator, I’m mainly just hoping they focus on some of the characters I co-created, because so many of them were created after I left the series.”

McLeod garnered an opportunity to work with Gene Colan on “Jemm, Son of Saturn” for DC Comics in 1984. “I always loved inking Gene’s pencils. I found him easy to ink, particularly on the ink wash jobs. His pencils were very difficult to erase, though, because he used such a soft lead and filled in all of his blacks so completely. It was best to ink him with a pen, because so much of the brush inking would come off with the lead when you erased over it.”

Along with Jemm for DC Comics, McLeod pencilled Superman in “Action Comics” and helped launch the new “Superman” comic series in 1991 with writer Louise Simonson and penciller Jon Bogdanove.

The art of Bob McLeod has even touched “The Ghost Who Walks,”  with assignments for publisher Egmont’s long-running comic-book series, “The Phantom.”

Over the course of his career, McLeod always wanted to ink his own pencils yet he was not fast enough to do that regularly. However, his favorite work has been his movie satires and the “Teen Hulk” strips in Marvel’s “Crazy.” “I’m primarily a humor artist but I also did some good work on ‘Star Wars,’ ‘Superman’ and ‘Spider-Man: Vengeance of Venom.’”

In 2006, McLeod wrote and illustrated “Superhero ABC” for Harper Collins, a hardcover book in which he was able to create silly characters designed to teach the alphabet to children.

“Post comic books, I have enjoyed working in book illustration and writing/illustrating the ‘Superhero ABCs.’ I worked with a good team that included Margaret Anastas, Meredith Pratt and Martha Rago, who helped me keep focused on our target audience of children aged 4-7 years old. I take the book with me when I make convention appearances and after 10 years, it still sells well.”

“I still attend conventions and take on commissions, but you can only draw the Wolverine so many times and I am looking forward to spending more time painting and sculpting. Every now and then I get an email from Marvel or DC to do a variant cover, and [recently], that is what I did so I still keep active but I let them find me now.”

Away from comic books, McLeod has worked with TwoMorrows Publishing as editor for “Rough Stuff” magazine [focusing mostly on pencillers and their sketches and storytelling], teaches part-time at the Pennsylvania College of Art and Design in Lancaster, and has worked in commercial art.

As one fan put it, McLeod made many a lesser artist shine with his superior draftsmanship, and that is exactly what the Inkwell Awards celebrate.

More information on Bob McLeod can be found at www.bobmcleod.com. A complete listing of his work can be found on the comic-book database web site.

Some quotes courtesy of https://www.firstcomicsnews.com/catching-up-with-bob-mcleod. Article by Tim Lasiuta, co-author of Brush Strokes With Greatness: The Life & Art Of Joe Sinnott.