(New Bedford, MA/USA—March 29, 2018) Who’s your favorite inker? The Inkwell Awards, a non-profit organization devoted to public education and promotion of the art of comic book inking, invites all to vote for the industry’s best of the year. The official public ballot will be available on the Inkwells’ homepage from April 1 through April 15.

Voting is open to fans and professionals alike. In addition to “Favorite Inker,” categories include “Most Adaptable,” “PROPS” (inkers deserving more attention), the “S.P.A.M.I.” (Small Press And Mainstream/Independent) and “All-In-One” for pencilers who ink their own work.

As a courtesy, also listed on the ballot are the nominees for the Joe Sinnott Hall of Fame (“HoF”), a lifetime achievement honor for an outstanding inking career of 25 or more years in American comics, whose winners are chosen by an internal committee (to avoid a “popularity contest” where recent names have more influence than past masters). Two nominees are awarded each year.

Also to be chosen internally is the Special Recognition Award. This lifetime achievement honor differs from the HoF award due to one or more factors such as the artist being out of the “public eye,” having limited name-recognition due to semi- or full retirement or death, limited-yet-influential output, social barriers such as gender/race, or other factors that might otherwise limit them from being nominated for a traditional HoF award. The SRA nominees are not listed on the ballot but will be discussed at the awards ceremony. As announced at last year’s ceremony, the award has been renamed the Stacey Aragon Special Recognition Award (SASRA) in honor of the longtime member of the non-profit who succumbed to cancer a year ago after a 10-year battle.

“We’re as excited as ever for this event, where the best of the best ink artists and their work get the recognition they deserve,” said Bob Almond, founder and director of The Inkwell Awards. “Though inkers have their own fans and followers, many often go unnoticed or are glossed over by most awards events. Ours caters specifically to ink artists and allows them to be recognized and appreciated in various categories. We encourage everyone who appreciates good work to participate; the more voters, the better.”

Once voting ends after April 15, the winners will be announced at the live awards ceremony at Heroes Con in Charlotte, NC on Friday, June 15th.

THE INKWELL AWARDS are for 2017 cover-dated
interior American comic-book material.

Most-adaptable: Artist showing exceptional ink style versatility over other pencil artists. (Every nominee must have at least two sources cited.)

Props award: Ink artist deserving of more attention for their work over other pencil artists.

The Ms. Inkwell role is to serve as the advocacy’s public face, meet and greet creators and fans at shows, help with fundraising and raise awareness for their mission of education and promotion for the art of comic-book inking. Skylar, an avid cosplayer from North Carolina, was scheduled to debut at a later show to work beside the current Ms. Inkwell, Hailey Skaza-Gagne, who would train her. Skaza-Gagne had to cancel and Godwin was asked to start early.

“Hailey had a private family issue and needed to take a break for at least this appearance,” said Bob Almond, the Inkwells’ founder and director. “She’s been our exclusive Ms. Inkwell for a record 21 events and nearly three straight years of exemplary service and work ethic. She just hates disappointing the fans and creators whom she truly cherishes, but is confident Skylar can do the job. Skylar has a sincere enthusiasm and passion for this role and can’t wait to start.”

Said Godwin,”I was so excited when Bob Almond asked me to be apart of the Inkwell family this year as they celebrate their 10th anniversary. Heroes Con 2014 was actually the first time I met Bob and was introduced to the Inkwell organization. Little did I know that 4 years later I would be asked to be a part of this wonderful non-profit and have the great opportunity to work with such amazing people.”.

One or both Ms. Inkwells will also appear at the East Coast Comicon in Seacaucus, NJ, on April 27-29 and at the organizations’s eighth annual live awards ceremony at Heroes Con in Charlotte, NC, on June 15-17.

The character of Ms. Inkwell was created by Almond and Randy Green to garner more attention for their booth at shows. Since the spokesmodel’s first live appearance in April 2010 at the Pittsburgh Comicon, the role has been taken up by over a dozen talented women at various venues. The Inkwell Awards recently published the fundraiser “Ms. Inkwell Gallery Book,” featuring the character’s history along with exclusive pinup art from many contributing artists. 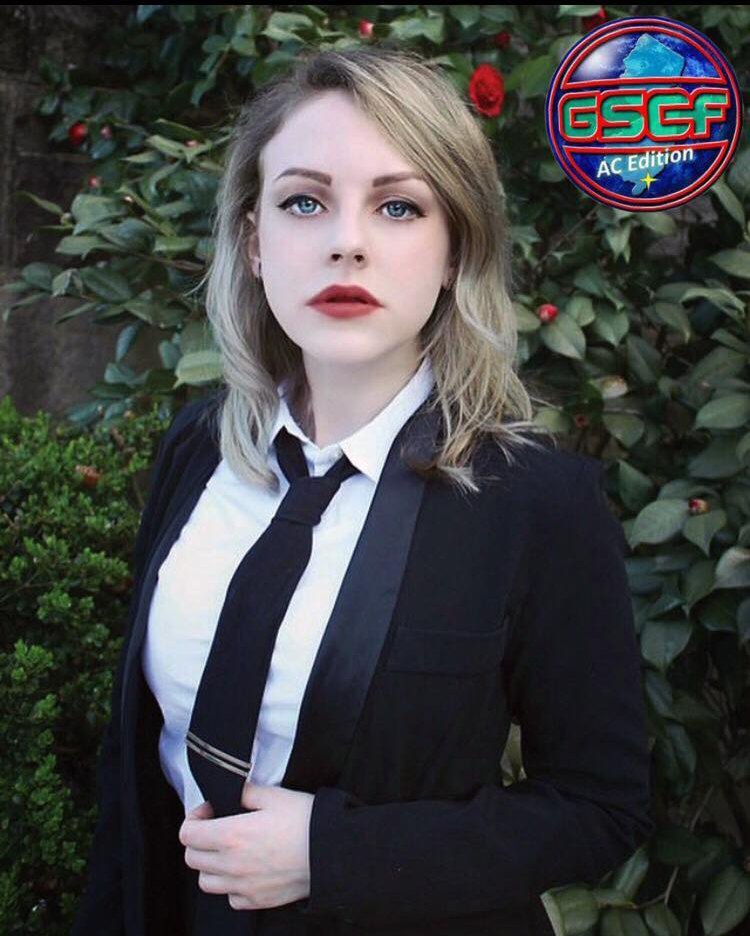 For your info the Inkwell Awards’ first wave of Larsen Challenge eBay auctions have completed today and we just launched the second wave on our eBay Store Page. After that ends we’ll have a consecutive third week made up of Erik Larsen pages that didn’t initially sell so they’ll be delisted at a slightly discounted starting bid.  There will follow the 2-3 waves of the original Joe Sinnott Inking Challenge after that. There will probably be a late third/fourth Larsen wave for some who shipped pages to me late, hopefully including mine, after the Sinnott ones. Special thanks to Stefan Kalscheid from the Official Savage Dragon Website who produced this file image above and the Larsen Challenge gif below. The tentative plan is that he’ll produce another one (or two) for the Sinnott pages. Thanks to all for their sharing our auction announcements on social media, for those who participated in the events and those who bid on and won these unique items!

From Comics for Sinners

It’s been eight years since Randy Green co-created and designed their spokes-model Ms. Inkwell and he just finished penciling & inking a new image of Ms. India Wells; jungle girl on the prowl! 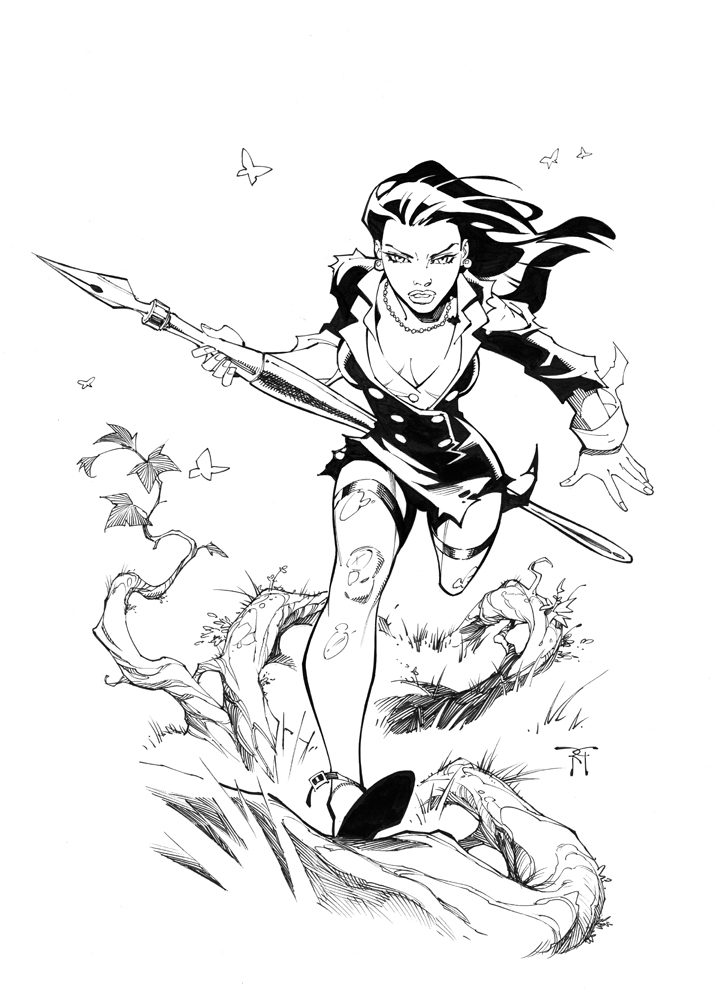