(New Bedford, MA/USA—February 22, 2018) The non-profit Inkwell Awards, devoted to promoting the art of comic book inking, is having their eighth annual Joe Sinnott Inking Challenge, beginning in April. They also have their third annual Sinnott Inking Challenge Spotlight, which focuses on the pencil art of a legendary creator/artist/writer/publisher. This year it’s Image Comics’ co-founder Erik Larsen. Artwork from both will be auctioned afterwards for fundraising.

“Due to the ongoing success of the original Sinnott Challenge, we expanded the program to include the Spotlight Challenge two years ago, with even better results,” said Bob Almond, founder and director of The Inkwell Awards (AKA “The Inkwells”). “We chose to showcase other contemporary, fan-favorite talents on a smaller scale with published and established inkers who may not have participated in the original challenge. We proudly featured the amazing pencils of DC co-publisher Jim Lee for 2016 and last year we were thrilled to have the great Neal Adams.”

The original Inking Challenge educates the public about inking by having industry legend and Inkwell Special Ambassador Joe Sinnott do a tight pencil of a character plus a “breakdown,” or rough sketch of another. This year, the characters are from Marvel’s “Thor: Ragnarok” hit film with Loki and Hela. Sinnott’s art was scanned and the file sent in blue-line form to various inkers around the globe to finish and/or embellish in ink.

Ink artists contributing their skills this year include Ken Branch, Anthony Fowler, Jason Moore, Joe Orsak, Terry Pavlet, J.L. Straw, Scott Rosema, Tom Schloendorn, Mark Stegbauer, Neil Vokes, Keith Williams and dozens of others, plus members of the Sinnott family. Submitted art may be viewed at The Inkwells’ ComicArtFans gallery. All pieces will be personally signed by Sinnott and include a certificate of authenticity.

Almond added, “Much kind thanks to Erik, Joe and Mark Sinnott, and all involved for their cooperation, support of our program, and appreciation of ink artists.”

Auctions for the Larsen Challenge original art will commence in February (date to be announced) on eBay and every other week thereafter, followed by the Joe Sinnott Challenge art and other late additions. The Sinnott art will eventually be collected into a book (the sixth such edition). Tentative plans are to also release a Larsen “Savage Dragon” book. Previous editions, along with other merchandise, are available for donations to the organization through their web store.

The Inkwell Awards is an official 501(c)(3) non-profit organization whose mission is to educate the public and promote the art form of comic-book inking, as well as annually recognize the best ink artists and their work. Now celebrating its 10th anniversary, the organization is overseen by a committee of industry professionals and assisted by various professional ambassadors and numerous contributors. They sponsor the Dave Simons Inkwell Memorial Scholarship Fund for the Kubert School and host the Joe Sinnott Hall of Fame Award. 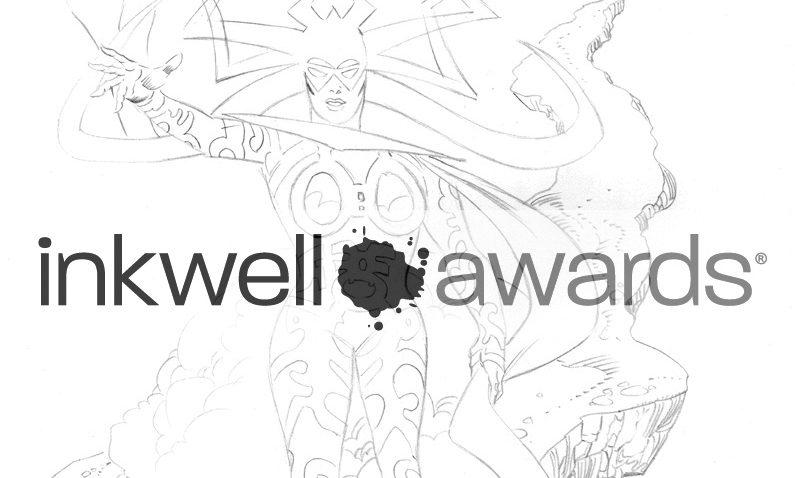 (New Bedford, MA/USA–January 12, 2018): The 501(c)(3) non-profit advocacy group, the Inkwell Awards, began its 10th season anniversary by electing artists Aldrin Aw (aka Buzz) and Pat Broderick as new creator ambassadors to help further the group’s mission of public promotion, education and recognition of the art form of inking and ink artists in the US comic book industry.

Both ambassador artists are veterans of Marvel, DC and other publishers, illustrating covers and interiors of many popular characters. Broderick began his career in the 1970s, Buzz in the 1990s.

“It’s always thrilling to have two veteran and fan-favorite creators like Buzz and Pat accept our invitation to add further credibility and exposure,” said Inkwell Awards founder and director Bob Almond. “I grew up enjoying Pat’s work. It’s been wonderful the last few years seeing him and his wife Pat return to convention touring, working on commissions and being back on comic assignments. He has been nothing but respectful of our mission and supportive of our non-profit. Buzz, meanwhile, has been a top professional and prolific Inkwell donor over the years. I was pleasantly stunned last year when, unsolicited, he offered to join us as a Special Ambassador to assist with fundraising and maximize those efforts. Buzz’s massive show exposure, his recognition, contacts and influence make him a worthy and extraordinary asset to us. With improved funding and resources, we can aspire to accomplish more than ever before.”

The Inkwell Awards is the only existing official 501(c)(3) non-profit organization whose mission is to publicly educate and promote the art form of comic-book inking, as well as annually recognize the best ink artists and their work. Now celebrating its 10-year anniversary, the organization is overseen by a committee of industry professionals and assisted by various professional ambassadors and contributors from within the community. They sponsor the Dave Simons Inkwell Memorial Scholarship Fund for the Kubert School and host the Joe Sinnott Hall of Fame Award.

The Inkwell Awards invites you to the eighth annual Joe Sinnott Inking Challenge. With his approval and support, we have taken a couple of his pencil art fundraising donations and converted them to bluelines for inking.

We’ve chosen ink artists who are A) part of our organization, B) Inkwell-Award recipients, or C) notable for their career inkwork, but any inker can take part, including novices. Some of you who missed previous Challenges asked to be added to the list and you are included here.

For fundraising and educational purposes, would you be willing to participate in inking one or both of these pieces? We’ll take the final images and post them on our Comic Art Fans gallery for comparison to Joe’s initial pencil art to showcase to the public the contributions and talents of ink artists. These pieces would also be auctioned off to raise funds for our vital operational needs and philanthropic programs. These include:

—The COMPliments Program (allowing HoF inkers who are not receiving collections of their work from publishers to receive them through us instead);

—Expenses for our live awards ceremony every June at Heroes Con, such as purchasing winners’ trophies, flights for award recipients, etc.

Thanks to generous artists like you, last year’s successful program (not counting the Neal Adams Spotlight spin-off) brought in over $2,100 and this year we anticipate an even better outcome. You can see samples of donations from our previous years at our Comic Art Fans gallery (top left-labeled links): http://www.comicartfans.com/GalleryDetail.asp?GCat=35444

ALL PROCEEDS RAISED go 100% to the non-profit and the only members paid for any services are legal, accounting and spokesmodels, as needed. NO Inkwell Committee Members or Volunteers have EVER received payment for their services.

If you are interested in contributing please REPLY back to myself <dmralmond@gmail.com> and senior contributor Tom Schloendorn <tom_schloendorna4@comcast.net> to confirm that you have the tools/capabilities to print up a hi-res blueline file on 11×17 2-ply Strathmore vellum board to ship back to me and we will promptly email you the hi-res file of either one or both images– please specify WHICH attached character you want. Files will usually be emailed within 24 hours of requests. (THE SAMPLES BELOW ARE LO-RES SIMPLY FOR REFERENCE ONLY). If you don’t have the printing capabilities and are an established, published professional but you’d like us to ship either or both pages of bluelined boards to you, please forward your shipping address to us in your reply.

ONCE YOU ARE FINISHED, PLEASE EMAIL ME A 300dpi SCAN OF YOUR WORK BEFORE SHIPPING THE PAGE if you want to be included in any subsequent book collections.

If you cannot participate we totally understand about your busy schedules and lives making it a challenge but PLEASE LMK ASAP, REGARDLESS (if we do this again, we’d probably touch base with you again…BUT NOT IF YOU DIDN’T RESPOND). Should you know of another notable inker willing to participate, please pass on their email address so we can invite them; however, we have the right to not include a request and please be aware that no work is guaranteed to be included in our subsequent book collection. But to be eligible for the book you MUST send us a 300ppi hi-res scan at full size upon completion and before shipping. We will be following-up with friendly reminders prior to the deadline.

***Joe Sinnott will sign every page. If you leave his blueline signature blank, he will sign it there (but it won’t be in the scan if used in the book). If you ink in his sig, he will sign the page outside the borders or wherever there is a good spot. Mark Sinnott will subsequently ship them to me for the auctions, which will run subsequent to that in 2-4 waves in April. (The less-inclusive Erik Larsen Spotlight Challenge art will run in late February-early March.)

SPECIFIC INKING NOTES: You can ink it ‘as is’ or reinterpret it, bringing something extra to the table….this year we will have a tightly-drawn LOKI and a loosely-drawn HELA.  You are encouraged to ink the logos to motivate more auction bids but you don’t have to.

Please LMK if you have any questions.

* reply to myself AND Tom if interested and request the hi-res blue line file(s) to be emailed or (vets only) the blueline print up(s) to be mailed with your shipping address.

* ship the art back upon completion to the Mark Sinnott address above. After that you can post it online publicly as long as you plug that (you may copy/paste): “It’s for the 8th JOE SINNOTT INKING CHALLENGE for the INKWELL AWARDS (http://www.inkwellawards.com) to promote and educate about the art form of inking and to raise funds for their non-profit organization and their annual Dave Simons Inkwell Memorial Scholarship Fund to the Kubert School.” (NOTE: Again, any art that is not hi-res scanned can NOT be scanned by us and will NOT used in a book.)

* we will be happy to mail you tax-exempt receipts upon request for your contribution.

* we will contact you later if we plan to include you in the book collection for the previous year’s contributions and get your bio/photo/comment information.

THANK YOU for your time, effort, and support, especially those who have been involved in this program for several years (you know who you are!).